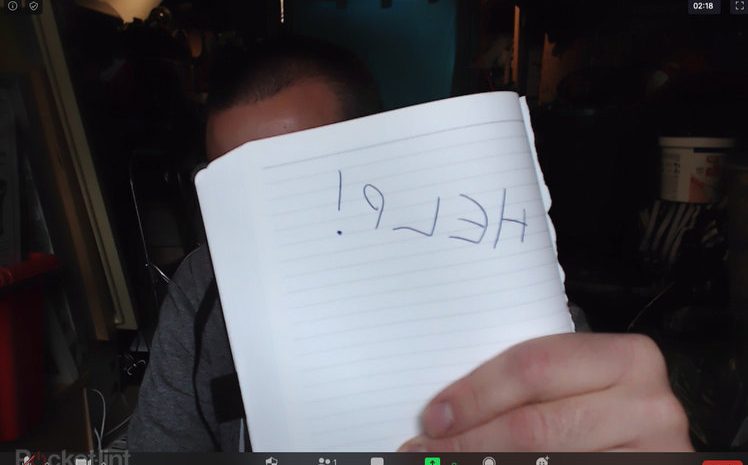 With a rise in video conferencing, many people are noticing that their Zoom video is backwards, with things like text and clothing motifs appearing the wrong way round.

It’s all about mirroring

There’s no need to panic, because your video isn’t actually backwards. When those people on the other end of the call see you, you look exactly as you should. That means that all text is the right way round.

So in essence, to fix this problem, you don’t have to do anything at all, because it’s only the preview of yourself in the video that looks the wrong way round.

That’s because mirroring is turned on by default when using Zoom. You can test this by reaching out to shake hands with yourself – mirroring will see both you and your video image reaching out with the same hand. That’s how you know mirroring is on. It’s also mirrored in Skype and Google Meets too.

Why is mirroring used?

A mirrored image presents the view of yourself that you’re used to seeing. You see it every morning when you look in the mirror. When it comes to presenting it’s a lot easier for you to understand what’s going on, giving much more natural results thanks to mirroring.

Without mirroring in your preview window, when you reach left, you’ll see yourself reaching right and that’s confusing. You immediately think you’re doing it backwards, because it’s not what you expect to see and you try to correct it. It’s a phenomena that only really arises with video where you can see yourself, which is only something we’ve been dealing with for a couple of decades.

The important thing to realise is that the people on the other end of the line aren’t sitting in your seat, they are effectively sitting opposite you. When you see their view – the unmirrored view – that’s like an out of body experience. It’s something you never see, which is why mirroring is used.

It’s not only limited to video conferencing, however, it’s just the video conferencing shows you what you’re doing while other situations don’t. Think about a teacher standing in front of a class if they say “look to your left” all the student look left, but that’s actually to the teacher’s right, because they are standing opposite. You’ll have probably seen this in gym classes, where the instructor says “move to your left” and then steps to their left, which is your right.

Don’t panic: All text is the right way round

The good news is that if you’re showing text through the camera – perhaps reading something and tracing your finger along the line – mirroring means that looks backwards to you, while it looks normal to everyone else on the video conference. Just don’t write anything backwards, because it will then be backwards.

Zoom, Skype, Google Meet all show you this mirrored view, but everything for the viewers is exactly as it should be, so don’t change anything, don’t write things backwards, don’t print things backwards – instead, just stop thinking about it, because you’ll tie yourself in knots.

How to turn off mirroring on Zoom

Zoom is (currently) the only platform that will let you turn off mirroring. If you’re finding it all too confusing – perhaps if you spend a lot of time presenting text like an online tutor – then you can turn off mirroring in the video settings.

Here’s how to do it:

Where else does mirroring exist?

Mirroring is really common on selfie cameras. Again, they’re presenting a view that you don’t usually see, i.e., someone looking at you, so those images you see on a selfie camera are mirrored, instead of what the camera is actually seeing.

You can test this for yourself with the handshake test we mentioned above. If you reach to shake hands with your image, a mirrored image sees you both raising your hand on the same side, so you can’t shake hands, as it were.

There’s usually an option in smartphones to save either the mirrored image that you see in the preview, or a flipped version which is what a person standing opposite you would have seen. Again, it plays havoc with writing on clothing, where brands are backwards if you save the mirrored image, which many people do.

Again, don’t think about it too much, because it will tie your head in knots – but if you find your selfies are always “backwards”, check the camera settings on your phone and you can probably change it to get the result you want.