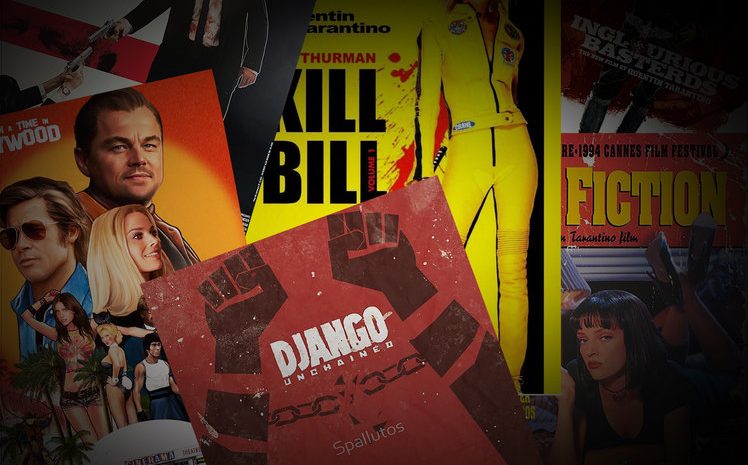 Quentin Tarantino is perhaps the most critically acclaimed director of our generation. His films tend to be standalone features filled with violence and adult content. They’re box office smashes that only properties like Marvel could rival.

While, at first glance, Tarantino’s films don’t have much in common with the summery popcorn hits of the MCU or even the Star Wars Universe, there is one way they are similar: Tarantino’s films are all part of a cinematic universe of interconnected films that weave together a larger story.

Called the TCU, the Tarantino Cinematic Universe is an official thing. It’s something Tarantino talked about in the past. His films have connections that bind them together. At the same time, the TCU operates differently than most cinematic worlds. For instance, there are two separate mini universes that Tarantino’s films fall into, called Realer than Real and Movie Movie.

Here is how Tarantino describes Realer than Real and Movie Movie:

“There’s the Realer than Real Universe, alright, and all the characters inhabit that one. But then there’s this Movie universe. . . From Dusk Till Dawn, Kill Bill, they all take place in this special Movie universe. So, basically, when the characters of Reservoir Dogs or Pulp Fiction, when they go to the movies, Kill Bill is what they go to see. From Dusk Till Dawn is what they see.”

We’ve broken down the best TCU movie viewing order (a spoiler-free version is at the bottom). It includes films in Realer than Real and Movie Movie. These are films that Tarantino has either written, produced, or directed. This viewing order leaves outs Jackie Brown, however, because it’s the only film Tarantino based on prior source material, so it doesn’t fit into the TCU.

For the true Tarantino fans out there, we’ve included a second spoiler-free list at the bottom of this guide that includes every Tarantino project, in release date order. There’s even a third list for all the films that Tarantino directed.

The Realer than Real Universe explained

WARNING: THERE ARE SPOILERS BELOW.

The Realer than Real Universe is essentially Taratino’s re-telling of US history. The films in this universe feature stories with alternate histories, if you will. For instance, the character of Django starts a slave rebellion in the film Django, but he does so a full two years before the Civil War even starts. In Inglorious Basterds, Hitler is murdered in 1944 instead of committing suicide a year later.

And, in Once Upon a time… in Hollywood, the Manson murderers show up at the character of Rick Dalton’s house rather than Sharon Tate’s. This all leads to the present day – a time more comfortable with violence – with films like Pulp Fiction and Reservoir Dogs. Django is about Django, naturally, who is played by Jamie Foxx. In the film, we see Django freed from slavery by the bounty hunter King Schultz (Christoph Waltz), and the two begin to work together before they agree to head to Candyland, a plantation in South Carolina owned by Leonardo DiCaprio’s Calvin Candy. Here, the duo hopes to free Django’s still-enslaved wife.

Placing a hero like Django at this point in US history would’ve allowed and perhaps inspired Samuel L Jackson’s character in The Hateful Eight (which is set 20 years later) to enter the career of bounty hunting. Sometime during the aftermath of the Civil War, John “The Hangman” Ruth, who is played by Kurt Russell, is forced into a stagecoach stopover by a blizzard. He’s with his latest catch, the outlaw Daisy Domergue (Jennifer Jason Leigh). While there, the pair is joined by a group of six strangers, including former Union officer Marquis Warren turned bounty hunter (Samuel L. Jackson) and Confederate militiamen turned sheriff Chris Mannix (Walton Goggins), and no one is sure who can be trusted.

There are a few subtle connections hidden in The Hateful Eight that link to other Tarantino films. The most overt is Tim Roth’s English Pete Hicox. He is related to Michael Fassbender’s character, Archie Hicox, in Inglourious Basterds. A group of Jewish soldiers infiltrate Nazi-occupied France during World War II and soon learn of an upcoming movie premiere that will have the entire Nazi leadership, including Hitler, in attendance. This film sets off an alternate timeline in human history, as it shows Hitler and every other higher-up Nazi murdered in a movie theatre. This ultimately gives cinemas a type of holy reverence in the TCU, but it also leads to the American public becoming comfortable with the extreme violence and gore in films, a theme in the TCU’s Movie Movie Universe. Tarantino’s latest film follows actor Rick Dalton (Leonardo DiCaprio) and his stunt double, Cliff Booth (Brad Pitt), during the 1960s in Hollywood. They’re both struggling, but just next door lives Roman Polanski and Sharon Tate, who, in real life, is murdered in 1969 by the Manson family.

Once Upon a Time… in Hollywood feels like it could be part of our real history — aside from some minor differences in the way the 1950s and 1960s movies are pictured in the film itself. They’re shown to be loaded with violence. For instance, there’s a movie scene Dalton shoots where he torches a group of Nazi commanders with a flame thrower. There’s a subtle detail in the Bounty Law western that makes Dalton famous, too.

In that movie, Dalton plays a bounty hunter known for killing outlaws. These film roles influence Dalton and his stunt double Cliff Booth to the point where they have no problem when inflicting violence in Once Upon a Time… in Hollywood, especially on those who they feel deserve it. True Romance is the first film in our list that is not directed by Tarantino, but the film was written by him before Tony Scott directed it. It follows Christian Slater’s Clarence as he falls in love with a hooker named Alabama. He kills her pimp, and the two of them run off to California. This is Tarantino’s feature-length debut. It’s all about the aftermath of a heist gone wrong. Six criminals are hired by mob boss Joe Cabot to steal diamonds, but after the police arrive impossibly early, they realize there must have been an informant amongst them.

Reservoir Dogs connects to the TCU in a few different ways — the biggest of which involves a certain briefcase we’ll discuss in Pulp Fiction. But another big connection is with the previous film on our list: Mr. White mentions working with a girl named Alabama. Here’s another film that Tarantino wrote but didn’t direct. Natural Born Killers follows the story of Mickey (Woody Harrelson) and Mallory (Juliette Lewis), both of whom are sadistic serial killers that go on a murder spree claiming 52 victims.

The film’s main connection to the TCU comes via the media and American public making cult heroes out of serial killers, once again showing how the public is desensitized to extreme violence. There’s also a little easter egg found in Tom Sizemore’s Detective Jack Scagnetti. He is related to Mr. Blonde’s parole officer, Seymour Scagnetti, in Reservoir Dogs. Pulp Fiction tells the story of a group of unsavory characters over a few days in Los Angeles. It’s the final film in Tarantino’s Realer than Real Universe and is loaded with easter eggs that connect it to all the other TCU films.

For instance, John Travolta’s Vincent Vega is the brother of Michael Madsen’s Vic Vega in Reservoir Dogs. Also, the mysterious briefcase — that we never get to see inside of — is apparently filled with gems from the heist in Reservoir Dogs. This film also connects to the TCU’s Movie Movie Universe, through Uma Thurman’s character of Mia Wallace and the pilot she worked on… but more on that in our Kill Bill summary, below.

Characters in these films aren’t directly connected; no random relatives are popping up in different movies as we saw with Vega, Donowitz, and Scagnetti in Realer than Real. Instead, the films are connected through TCU easter eggs (like the mention of a Big Kahuna Burger in Death Proof, or a character smoking Red Apple cigarettes in From Dusk till Dawn and Planet Terror).

They’re also a departure from reality. They’re movies with vampires and zombies and Uma Thurman successfully fighting 88 people with a Katana. There is, however, one distinct way that films in the Movie Movie Universe connect to the Realer than Real Universe.

Hint: Is Mia Wallace in Pulp Fiction Beatrix in Kill Bill? We’ll get to that later. Quentin Tarantino wrote and starred in this film directed by Robert Rodriguez. It follows the Gecko Brothers — Seth (George Clooney) and Richard (Tarantino) — as they abduct the Fuller family and attempt to use them to sneak across the Mexican border. But once they make it to the bar where they’re supposed to meet their contact, they find it infested with a couple dozen vampires.

There are two sequels to this film, and they’re technically on this movie order list, but they aren’t required viewing: From Dusk till Dawn 2 Texas Blood Money and From Dusk till Dawn 3 The Hangman’s Daughter. Tarantino’s production company, A Band Apart, produced both, and they’re supposed to serve as films that Vic Vega in Reservoir Dogs would go see when he’s not severing ears off. Tarantino wrote and directed Death Proof. It tells the story of Mike (Kurt Russell), a stuntman who murders women by getting into accidents with his car, which has been retrofitted to protect him from violent impacts. But Mike meets his match in the form of Zoe, a stuntwoman played by Zoe Bell, and friends.

Tarantino also served as a producer on Planet Terror. It’s a Robert Rodriguez film, released alongside Death Proof as a double feature known collectively as Grindhouse. They were both designed to resemble old-school exploitation films. Planet Terror specifically focused on what happens after the release of a deadly toxin, called Project Terror, which turns the residents of a small Texas town into blood-crazed zombies.

Tarantino himself has said Grindhouse is in the Movie Movie Universe. It’s not explicitly clear how — other than they’re violent movies his characters would likely want to see in cinemas. Kill Bill introduces us to a pregnant bride named Beatrix, played by Uma Thurman. She’s shot in the head on her wedding day and spends four years in a coma before waking and seeking vengeance upon Bill and the Deadly Viper Assassination Squad, of which she used to be a member. Now, to tie this all up together, we need to go back to the Jack Rabbit Slim’s scene in Pulp Fiction…

In that film, Uma Thurman’s character (Mia Wallace) describes a failed TV pilot known as Fox Force 5. It’s a team of the most dangerous women in the world, including a blonde leader, a Japanese Kung Fu master, a black demolitions expert, a french woman who specialized in sex, and herself, Mia, the most dangerous woman in the world with a knife. Notice the connection there?

That’s where this all leads: Kill Bill is a reworked version of the Fox Force 5 pilot, which Mia Wallace described in Pulp Fiction from the Realer than Real Universe. But, in the Movie Movie Universe, that TV pilot has been turned into two Kill Bill movies. And Uma Thurman isn’t playing the character of Beatrix; she’s playing Mia Wallace, from Pulp Fiction, who’s starring in the Kill Bill series.

The Realer than Real Universe

Then maybe you’ll like our watch guide for Marvel films and TV shows before you see The Avengers: End Game.