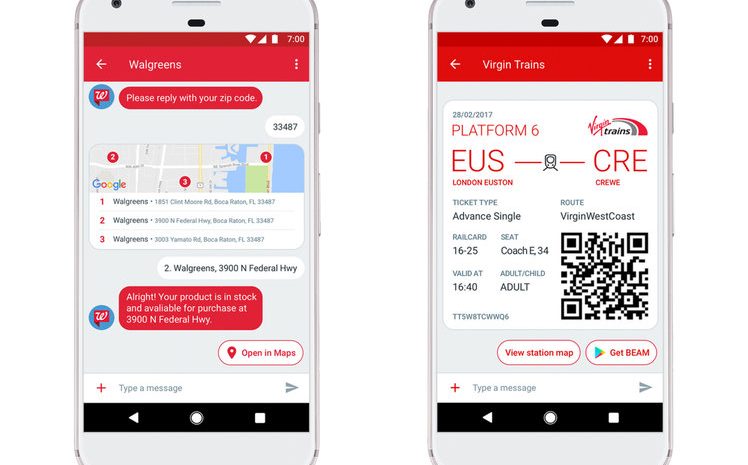 While there have been many attempts on Google’s part to launch one, there is one thing that Android has always lacked: a true messaging competitor to Apple’s iMessage. That could all be set to change as Google embarks on a large-scale rollout of the RCS (rich communication services) messaging platform, adding a raft of new features to messaging on Android.

But what exactly is RCS, what features does it have and which devices is it be available on? Read on to find out the answers to all these questions and more.

What is RCS messaging?

Rich communication services is a protocol between both mobile operators and phones. The overall aim of RCS is for it to eventually replace SMS and MMS messaging, the formats we’re all familiar with as they have been around for years, but they have limitations.

RCS was first formed in 2007 and was taken over by the GSM Association (GSMA), the industry trade body that represents mobile operators worldwide, in 2008. In 2016, the GSMA agreed on a Universal Profile – a set of standards that all mobile operators, phone manufacturers and software providers can use to help implement RCS on devices.

RCS messaging is very much like WhatsApp, where live chat can take place, including multi-media support, with everything handled via the data network. It’s seen as a rival to Apple’s iMessage service, although there are some subtle differences between how these services operate.

There are probably a number of reasons for that – dropping SMS or MMS tariffs and working on cross-network functions are likely to have seen RCS as low priority.

However, as of June 2019, Google has taken the reins back. This will see RCS messaging supported on Android devices and using Google’s servers rather than the mobile phone network’s servers. Google has said, however, that if a network supports RCS, its own servers can be used for transfer of messages.

That will get the system off the ground, bringing a new messaging platform to Android users – but Google is only targeting France and the UK initially. In the UK, the service went live on 28 June 2019 for some users.

Three in the UK has already confirmed that “Enhanced Chat” is coming to the network, saying that Huawei and Honor will be first, followed by Samsung – all enabled by Google. Vodafone in the UK has supported RCS since 2014, but it’s unknown if messaging will use Vodafone or Google servers.

What does RCS messaging do?

The biggest advantage RCS Messaging has over SMS – and the reason it will be implemented in the first place – is that it will enable users to send rich, verified messages. This means messages will be able to carry more information, so users can send things like photos, videos and audio messages to one another.

They will be able to carry out video calls with one another from directly within the messaging app, rather than having to rely on third-party software. Group messages are possible, and little things such as read receipts and indicators to show other users are typing a message will be included as well. RCS messages will also do away with the 160 character limit currently found in SMS messages.

They’re features that Apple iMessage, WhatsApp and Facebook Messenger have offered for some time, but Android phones have gone without in a default messaging application. That’s an important point here – everything will be rolled into the Android Messages app.

Businesses will be able to use RCS Messaging to send things like boarding passes for airlines, package delivery notifications and credit card fraud alerts.

RCS messages rely on data in order to be sent between users, and so messages are sent with client-to-server encryption. The protocol should also prevent spam messages from reaching your device, as for a company to be able to send a message via RCS, they have to go through a brand verification process.

RCS messages received from companies will have the company’s name in the sender info, rather than just a mobile phone number.

However, at the moment there’s no universal support for end-to-end encryption. As the initial roll-out will use Google’s servers – and potentially the network’s own if supported – it means there’s a couple of places where your messages could potentially be intercepted. Encryption will only be in place for the transmission of the messages.

This might change – but it’s certainly something to keep an eye on.

Who Is Supporting RCS Messaging?

Many companies, including operators, manufacturers and software providers have pledged their support for RCS Messaging, but by far and away the biggest supporter is Google.

The technology giant has been trying to increase the adoption of RCS messaging in recent years, as it wants to implement it in all Android phones. Google is rolling out the new features afforded by RCS as “chat” and it is part the existing Android Messages app – alongside SMS and MMS.

While the app on Android phones is now widespread – you can download it from Google Play – the rate of adoption and success of RCS messaging depends on the mobile operators. At the moment there are variations of the RCS protocol, so phones using RCS on some networks aren’t supported elsewhere. It’s these interoperability issues that the GSM Association’s Universal Profile aims to eliminate and something that Google is now trying to tackle.

If you send an RCS message to someone who’s phone or mobile network don’t support it, it will be sent as a regular text message, but a lot of work is underway to resolve that. For example, Google and Samsung have been collaborating to ensure that respective RCS apps work together through Android Messages and Samsung Messages.

There are currently 60 supporters of RCS Messaging, broken down into 47 mobile operators, 11 OEMs and 2 OS providers.

How can I see if I have RCS support on my phone?

Firstly, you should use the Messages app and make sure it’s the default messaging app (while other apps will support it, Google’s approach means you need to use its own app).

RCS is something that you have to opt into and when it becomes available via Google or your provider, you will receive a notification asking you to opt in. You’ll have to agree to Google’s terms and conditions.

Any costs will be part of your data plan.

What about Apple? Does it support RCS?

Apple is noticeably absent from the list of OEMs that support RCS. The Cupertino tech giant hasn’t said whether it will eventually support the protocol or not, but for now it isn’t willing to adopt it.

If Apple doesn’t adopt RCS, many smartphone users will still likely rely on apps such as WhatsApp and Facebook Messenger to message friends and family between Android and iOS, so that they can send photos, videos and other rich information.

Just what effect this will have on RCS’ success remains to be seen – although ultimately, with Apple already offering iMessage to its users, it might never see the need to expand rich messaging to interact with users of other platforms.