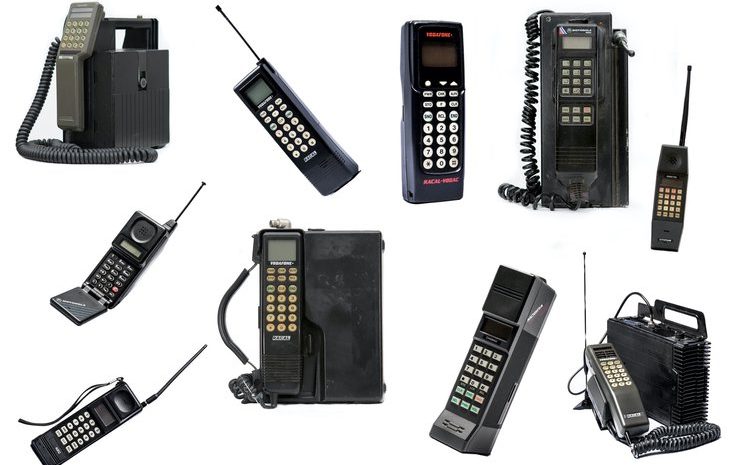 Looking back at the development of the mobile phone industry can make for dizzying research. The speed of change, and the extent to which phone models got smaller, more powerful and more useful over short bursts of time is jaw-dropping in retrospect.

If you rewind as far back as the 1980s, you’ll find yourself at the very genesis of the mobile revolution, with the first mobile call ever in the UK being placed in 1985 on Vodafone’s newly-opened network.

It’s 35 years since that first call was made by Michael Harrison, the son of Vodafone’s chairman, and to mark the occasion the vaults have opened to showcase some of the phones that people used back in that seminal decade. In the short five years between 1985 and 1990 you can already trace the speed of development, as the models get smaller and less cumbersome.

We’ve gathered together some of the best-selling phones from those five years, as a trip down memory lane for you, or, if you weren’t around back then, a way of underlining how far the technology you rely on has come. In each case, as a little bonus, we’ll let you know what you would have had to fork out to get one, as well as what that price is equivalent to in today’s money. The very first mobile phone that Vodafone sold, the VM1 stretches the definition of “portable”, as you’d expect from an early attempt. While, yes, that is technically a carrying handle, it weighed nearly five kilos, so was really intended to be bolted into a car, while the handset would ride up front next to your driving seat.

It even had an aerial that would be drilled into your car for reception. So, more car phone than mobile phone, but the VM1 still took the baby steps that were needed. The VT1 followed hot on the heels on the VM1, and was similar in many regards, especially as far as being pretty massive was concerned.

A really interesting comparison from now to then can be found when it comes to the VT1’s charging time — hooked up to your car, it would charge for 10 hours to provide 30 minutes of call time before it would conk out. Impressive for the time, but it puts our modern impatience into some perspective. Compared to the VT1 and VM1, this is the first phone that’s really recognisable as portable without needing a car to make it so. Motorola’s first effort has that iconic “brick” look to it, but was a serious upgrade on the older models we’ve looked at. This time round, a 10-hour charge would get you an hour of talking time.

The 8000 X had been out in America for a couple of years, gathering steam, and was a real favourite through the 80s, steadily coming down in price over that time. When it first came out, though, it was expensive to a degree we might call crazy nowadays. Just because Motorola had a slinky number out, though, doesn’t mean that all phones were suddenly small. The Panasonic C series was still pretty portable in comparison to previous efforts, and a much more affordable handset, if still hugely pricey.

It came with a carrying case so you could sling it over your shoulder, and weighed 3 kilos, so you’d be better off using that case than not. Motorola didn’t hang about in the 80s, eh? It’s next effort was actually inspired by, and derived from older car phones, but iterated on them to bring in an LCD screen and more function buttons.

The phone also had an address book for phone number storage, which is the sort of feature that makes it feel like a real move towards modern mobile phone standards. VPI is one of the name on this list that has remained fairly obscure, unlike others. The Citiphone is a real looker, for the times, though, with a sleek design and small size.

It’s most fondly remembered for having a very useful feature — if you dialled 001 it would play ‘God Save the Queen’. You know, just in case. That’s right, Mitsubishi was in the phone game back in 1986, exporting tech from Japan and coming up with a pretty intriguing design for the Roamer. It had its battery mounted to the side of the phone, rather than its back, making it a bit thinner and potentially easier to carry depending on your bag.

The Roamer did really well in the UK, too, becoming one of the 80s’ most popular phones. Another big name entered the fray in 1987, with Nokia’s Cityman already betraying hints of the timeless ‘brick’ classics that were to come. By 1988 Nokia had a 10% market share in mobile phones in the UK, including its car phones and smaller numbers like the Cityman.

That said, because the market moved on so quickly, the Cityman actually wasn’t a huge success, available at a steep discount within a year of release. Still, Nokia had good things to come, so don’t feel too sorry for it. The 8500X might just be the definitive ‘brick’ phone, becoming a staple of modern business life in the late 80s. Its battery could last through a day on standby, and offered an hour of talk time, plus a contacts book to store numbers, making it actually useful if you needed to be connected all day.

There were also multiple colour options, opening it up to being more of an accessory and less of a work phone. While their shelf life was coming to an end by the early 90s, it remains a classic bit of phone design. Its brand might not have stood the test of time, but NEC’s 9A was a great little phone, with battery life that beat out most of the competition. It was the best-selling new phone of 1988 in the UK, after its release, and contributed a great deal to the continued slimming down of phone models from competitors, including Motorola in particular. The D series from Panasonic was a nifty little number with a key feature that feels almost like a gameshow challenge, looking back. If you were about to lose power during a call, you could actually swap its batteries out without the call dropping out. Having said that, it would only succeed if you could make the swap in two seconds or less.

While its battery was designed with these quick swaps in mind, our hands get slippery just thinking about the stress of trying it out during an all-important call. Another phone from Panasonic came in the form of the F series, and you can really start to see the early stages of the design language that would come to dominate mobile phones in the 90s, with the phone’s layout getting more and more compact.

The F series also had its own battery trick up a sleeve, though — if you wanted more battery life and were happy to carry a little extra weight and size, you could upgrade to a bigger battery for that purpose. Why not put the choice in your customers’ hands, after all? The last phone on our list is another one that shows off a big change in designs, one that would reverberate down the years. The Motorola Micro-Tac was the world’s first flip phone, and you can actually see where Motorola started down the road to its famous Razr designs.

So slim that its battery life was frankly terrible, the Micro-Tac also has a noteworthy amusing asterisk to its name. That antenna, which is extendable at will, is actually completely cosmetic, with no effect on reception. Being able to pull it out was basically just a placebo effort, since Motorola worried that customers would be confused by the lack of antenna if it wasn’t there. Since the customer is always right, a flimsy fake one was added for peace of mind.