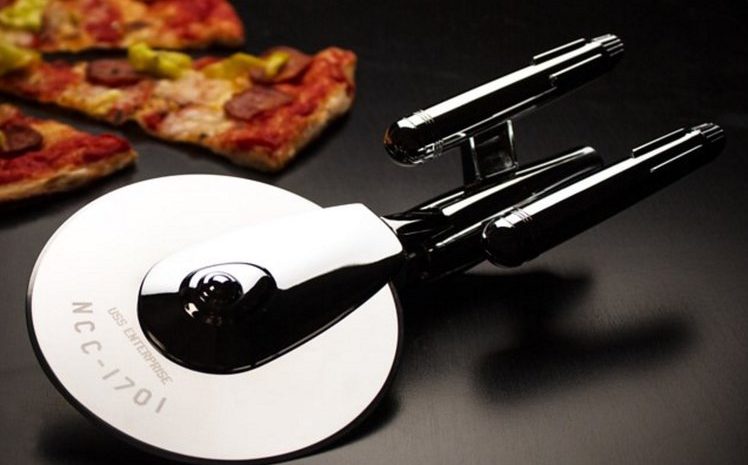 Trekkies have a lot to be excited about right now.

There’s a new TV series coming soon – the eighth in the franchise – and it’s brilliantly set to centre around Jean-Luc Picard. It’s set to air as 10 episodes in early 2020 and we can’t wait.

So, to help them savour the moment (and possibly go where no man has gone before), we have compiled a gallery full of Star Trek-themed gadgets and toys, including everything from cosplay-worthy TNG pyjama sets to a Bluetooth-enabled Original Series communicator.

That’s right – say it with us: shut up and take my money! Every fan of the original series of Star Trek has no doubt dreamt about owning a real communicator. In 2016, The Wand Company released an officially licensed Bluetooth Communicator that pairs with your smartphone so you can make and receive calls like Captain Kirk himself.

This nifty little communicator is jammed full of awesome features like wireless charging, authentic sound effects, a quality speaker and MEMS microphone. What could be more awesome than this, other than a working teleporter of course. Set phasers to standby and arm yourself with the pinnacle in remote control geekiness – a universal remote control built to look like a phaser from the original Star Trek series.

Another must-buy for classic fans and a brilliant addition to your AV gear setup as well. Not easy to get hold of anymore, but perhaps the coolest addition any Trekker could add to their bookshelf. A bookend that features Captain Kirk, in the Captain’s chair, looking deep in thought. We suspect that not many people use landline phones anymore, but if you’re one of the few that do, then this is an awesome purchase. A phone styled after NCC-1701. Make a call with the future. Satisfy your craving for pizza while also showing off your love for Trek with this Enterprise pizza slicer.

“The Star Trek Pizza Cutter has its mission to explore strange new pizzas, seek out new toppings and cheeses, and boldly cut pizza where no man has cut before.” Wear your geek right on your sleeve with this Trek styled business card holder. Will business cards still be a thing by the time Federation is established? Doubtful. But in the meantime, you can carry out business in style. Looking for something Trek-themed to keep you warm in the cold winter weather? What about a fancy scarf emblazoned with the Starfleet logo and classic colours from The Next Generation. What time is it? It’s Trek time. Keep on Trekking, all the time, with this wall-mounted Starfleet clock. It’s big, bold and beautiful and it doesn’t even break the bank either. Yes, there is essentially a Star Trek themed item for basically anything you can think of. Even eating raw fish. Dip your fish and rice combo into the hull of the USS Enterprise and get a great taste in style. You might be getting the impression we’re obsessed with food or at least that gadget companies think Trekkies are. But there’s no denying these Star Trek themed cookie cutters are awesome. Set replicators to delicious and get yourself some tasty snacks. There are quite a few Star Trek-themed watches out there, but few are as snazzy or stylish as this one. Not only does it look great but it also comes engraved with the “Live Long and Prosper” motto. Much more than just a badge, this is a real working communicator. Of course you need a smartphone to support it, but otherwise, it’s fairly awesome. This little communicator pairs with your phone via Bluetooth and allows for hands-free phone calls as well as working with music playback and things like navigation apps too. Add to that the classic communicator chirp sound effect and you’ve got a real winner. Another awesome addition to your home comes in the form of a motion-sensitive door chime that makes a sound every time someone crosses the threshold. This gizmo also features a classic door opening sound effect and even a red alert alarm. Not quite enough? How about a button that activates the Communicator Whistle? Now for something a little more menacing – a 1:1 scale Sword of Honour replica. This is an officially licenced Klingon Bat’Leth replica that could be yours to own. Just be warned, it’s not cheap, but then it is crafted from high-grade aluminium, boasts a genuine split leather grip and a cold cast resin display stand. Plus it looks awesome too. What better way to slob-out and binge some classic Trek episodes than in an uber comfortable, super soft and awesome looking bathrobe. Various versions are available, some even include the rank pins for a real sense of authenticity. Other than perhaps Picard himself, is there any other icon character from TNG that Locutus of Borg? Certainly, a memorable one and a great vinyl action figure to own if you’re a fan of The Next Generation. Resistance is, after all, futile. This is a replicator Tricorder that’s based on the classic 23rd-century design.  An electronic Science Tricorder that you can own and use in your own home (or on missions in the galaxy). It features light-up buttons, sound effects and classic style. There’s even a removable scanner accessory – perfect to take with you on your next away mission! These bags are great. Not only do they help you boldly go wherever you’ve been (or not been) before, with the Starfleet logo loudly and proudly displayed for all to see. But they also let you show off your rank as they’re available in the different uniform colours including gold, red and green. Upgrade your bed with these officially-licensed bedding items that include a red duvet cover and a rank pips pillowcase. Now you can live, breathe and sleep Trek. Get them started early with this awesome baby onsie. You can’t be sure they’ll be a Trekkie, but you can only try your best. In the meantime, at least they’ll be brilliantly dressed. Bedtime, the final frontier. Boldly go to bed like no one else has before – sporting some comfortable Star Trek getup that’s bound to please. That’s right, you can own your Tribble. These are apparently the “softest Tribbles ever made” and are brilliant little furballs every fan of the original series will love. The best thing is, they don’t cost much so you could buy a load and recreate “The Trouble with Tribbles” in your own home. Let’s face it, you’re probably never going to get the chance to command your own spaceship, but that doesn’t mean you won’t get the chance to control one. This remote controlled U.S.S. Enterprise should provide some light entertainment for Trek fans, if nothing else. You have to be a real Trekkie to know what this one is:

“This Original Series Star Trek Rock Mood Light faithfully reproduces helmsman Sulu’s thrilling Alfa 177 planetary experience, where he used his phaser to heat a rock and thus save him and his away team from perishing in the freezing conditions.”

Another cool little tribute to the show lovingly crafted by The Wand Company that you can see in action before you buy.