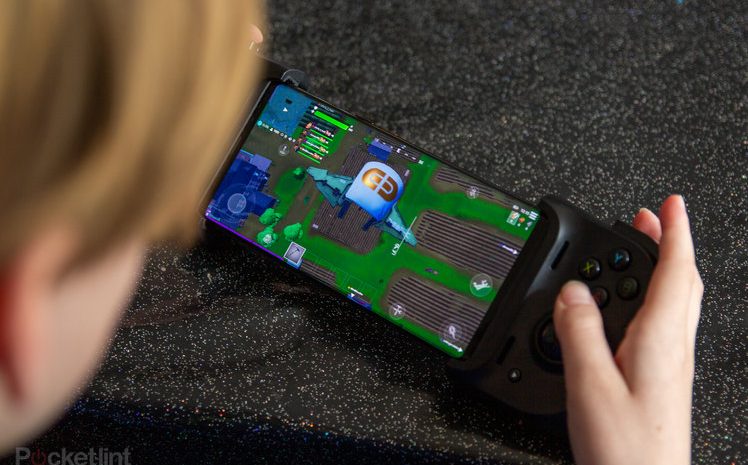 Razer and gaming go hand-in-hand, but, looking to expand its reach into the popular mobile segment, comes the Kishi – a controller accessory for Android or iPhone.

This type of controller isn’t exactly new: there are a number of Android gaming phones that ship with controller accessories that will attach to the phone to move the controls from the screen to physical controls.

The Kishi works in much the same way, with some crafty design to make this a neat package. The two halves of the device are connected on the rear, neatly folding away to make a more compact bundle when you want to store it. A quick release lets you expand it, connecting to a phone via USB Type-C, or Lightning if using an iPhone.

Compatibility relies on a couple of factors. Firstly, that your device has USB Type-C in the centre of the base and secondly that it will fit within the Kishi’s rubberised apertures. We’ve used a number of phones to test the Kishi, from the budget Redmi Note 9 to an older Samsung Galaxy Note 8.

The Kishi will add about 60mm to either end of your phone when it’s installed, making for a long device overall. It feels nicely secure with rubberised inserts in the Kishi holding your phone firmly, so it imparts a sense of quality too.

When your phone isn’t in it, it clicks together so it’s easy to stash in your bag, but it’s a shame there isn’t any sort storage bag for it; we can see that if you throw the Kishi into your rucksack, there’s plenty to get damaged or dirty, so you might want to wrap it up.

The Kishi draws its power from the phone you connect it too – so as soon as you connect your phone, it works. There’s a USB C connection on it too, which allows passthrough charging so you can charge your phone while you are playing.

A word on sound

The design incorporates two cut-outs on the right-hand end. This allows speakers on the bottom of a phone to be heard when using the controller. If you have a phone with only one speaker on the base then this actually boosts the performance, as it won’t be covered by your hand when playing and the sound is projected forward, rather than into your hand.

If you have a phone with duel front-firing speakers you might find that both are blocked by the Kishi and certainly, the left-hand speaker (on the top of the phone) is likely to be blocked, so you’ll lose some of the more advanced stereo effects your phone might be able to offer, depending on the design of your phone.

There’s also no provision for physical headphones as there’s no 3.5mm headphone socket, so if you want the best sound, you’ll need to use Bluetooth headphones.

The controls very much reflect what you’d find on a console controller with two thumb sticks, both clickable, as well as a four-way controller, and A B X Y buttons. There is also a pair shoulder buttons on each side, giving a couple of extra options, while arrows and home buttons finish the loadout.

Some of the controls will work natively with your phone, but we’ve found the experience is different from device to device. For example, on a Samsung phone, we can use the direction controllers to select and open apps, moving through menus and so on. On a different phone, you might not find that possible.

This only really becomes relevant as it’s easier to move around the phone without having to start touching the display. Of course there are still going to issues around things like unlocking – especially if there’s a fingerprint sensor on the back of the phone as that’s going to be inaccessible.

So, there’s some compromise that comes with things and in use, you’ll likely still have to occasionally have to tap the screen – for example to progress cutscenes in games, but you soon get used to this hybrid form of play.

Nothing is more important than the games, as that’s what makes this type of device. Firstly, you can’t use it for games like Call of Duty Mobile or PUBG Mobile – these controllers are banned in those games and some of the mapping apps that you might use to adapt the Kishi to control those games – like Octopus – are also banned.

However, some big-name games are supported, such as Fortnite, which basically works just like the Xbox. If you’ve played Fortnite on a console you can probably move straight over to playing on a mobile device with the Kishi. There’s a slight learning curve, but you’ll soon be up and running and you’ll get used to using a mixture of button and touch controls, although we’d say it’s a little harder on mobile than on the big screen.

For other games you’ll have to look to the Razer Kishi app that will boost your discovery. If you’re considering buying the controller, then the app is the place to start, because it lists the games that are compatible, which will offer the best experience.

Many of those games have a cost, but there’s also a range of supported games that are free to play that benefit from using a controller because it leaves you able to see the display. In most cases you’ll just have to figure out what does what with a little practise, but you’ll soon get the hang of it. Some games, like Real Racing 3, are supported and detect the controller, giving you guidance on which button to press as you play. In this case, it’s a very different experience moving from motion control to physical control.

If you’re looking to map the buttons to other games then you can use Octopus, but you might lose those customisations when the game updates which is something we’ve found happens with some of these types of controllers on other phones.

The bigger play here isn’t actually with mobile games, it’s with cloud platforms. The Razer Kishi is compatible with Stadia, Microsoft xCloud, Nvidia GeForce Now and others and that’s a huge part of the appeal here.

The gaming experience: Is it worth it?

Most of our mobile gaming is centred around AAA mobile titles – made to be controlled with on-screen controls. Those games – like PUBG Mobile and Call of Duty Mobile – take up the majority of our time and for these sorts of games the Kishi doesn’t have a role to play. Equally, if you play many of the tap games, again, there’s nothing it can offer.

Kishi instead focuses on those games that really owe themselves to their arcade or console originals, where controls provide plenty of options. Playing King of Fighters using buttons rather than on-screen controls gives it a much more arcade feel, which is great. You still have the virtual controls on the screen, but in some cases, you need those controls to see which moves you have powered-up.

In some cases, having buttons and proper movement controllers overcomes some of the touch overload that can happen in games where you don’t get the action you want because there’s too much happening on screen.

The contribution that Kishi will make to you will depend on the games you want to play. It’s not really in a position to challenge something like the Nintendo Switch Lite, because mobile games will remain very mixed in their design – some of the best mobile games are the best because of their intuitive touch interaction and that’s not going to change.

However, there are some great experiences in the support for game streaming services where you need to be playing with a controller. Firing up Stadia, we were quickly playing Doom 64 with the Kishi and loving the experience. This is where controllers like Kishi can really come into their own – you can be playing at home with Stadia on your TV and take that experience on your travels in an easy way (as long as have a great connection … roll on 5G!).

In that context the Kishi really has a place, because it helps deliver on one of the main objectives of cloud gaming, which is being able to play on any device. What’s perhaps more important is that you’re invested in a cloud system and that you’re happy to buy games via that method (or subscribe). Alternatively, if you want to get more out of your mobile Fortnite gaming – and yes, given that Fortnite is so big and the Kishi isn’t hugely expensive at £79.99/$79.99/€89.99, some will see that it’s worth buying just for playing Fortnite alone.