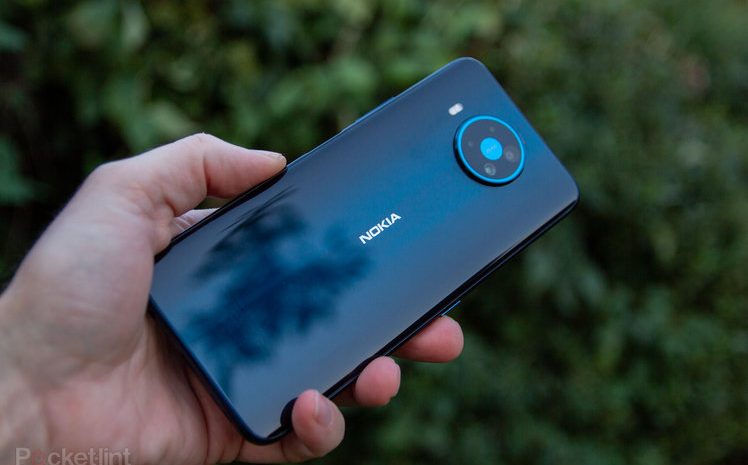 The Nokia 8.3 5G is a big step for Nokia. It’s a phone onto which great hopes were pinned, the phone to appear alongside James Bond in No Time To Die, while also moving to 5G.

It is a phone that’s very much on trend, offering flagship features at mid-range prices, which is by far the most exciting segment of the market in 2020.

But delaying this phone means it launches against stiff competition: having been one of the first Snapdragon 765 phones announced, it’s only just coming to market towards the end of 2020.

The Nokia 8.3 has emerged as something of a flagship phone for the brand. With the Nokia 9 series seemingly vanishing and with most of the rest of the family dominated by mass market devices at affordable prices, the Nokia 8.3 5G is more ambitious.

It’s a big phone. Just glancing over the measurements and the weight reveal that. It has an aluminium core, coated in a polymer and then topped with Gorilla Glass, with “metalisation” process used to create the colours of the back, called Polar Night and designed to provide a link to Nokia’s Scandinavian heritage. It’s a good looking phone, but apply a little more scrutiny and we can’t help feeling it’s a little large: the screen could reduce the bezels, especially at the bottom of the display, although we appreciate the curves to the rear which make it sit in the hand nicely. It’s a bit of a slippery fish though and given the high gloss finish, it would be a shame to put this phone in a case – but we feel that will be necessary to keep it looking good.

One of the interesting decisions is to go with a side-mounted fingerprint scanner. That avoids an under-display unit and keeps the back clear. We’ve had no problems with it, it unlocks reliably enough.

The left-hand side sees a Google Assistant button and this is opposite the fingerprint scanner, so accidental presses are frequent. Given that you can launch Assistant with a swipe on the display or via voice, we can’t help feeling the extra button is unnecessary. You can turn the button off, however, which is a useful option for those who don’t want it. There’s a 3.5mm headphone socket on the bottom of the phone, but only one speaker, also on the bottom, so the sound is easily blocked when playing games in landscape. It’s not a great audio experience as it lacks stereo, so you’re better off sticking to headphones when gaming or watching videos.

There’s a 6.81-inch display on the Nokia 8.3 which is towards the large end of the scale. It fits with the trend for big phones and gives you plenty of space to play games, consume media, or just explore the online world.

It’s a 60Hz display with a 21:9 aspect and it’s LCD rather than OLED, although it’s good quality, with vibrancy and pop. You can also tune the white balance to your preference and we’ve little to complain about when it comes to the overall look of this display. There’s a punch hole in the display which is a little on the large size by modern standards, but it’s a nice feature and we prefer it to the notches that some other devices have used.

Finally, and this is a niche point, the polarising layer on this display runs in landscape, so if you wear polarised sunglasses, the screen will black out completely in landscape, which is particularly troublesome when using the camera.

Glance over the hardware and you know exactly where the Nokia 8.3 5G fits. The Snapdragon 765 has very much been the story of 2020, opening up 5G at more affordable prices, but perhaps more importantly, narrowing the gap between the flagship and the mid-range experience. There are now serious mid-range competitors that offer much better value for money than flagship phones and that’s where the Nokia 8.3 sits.

That’s why the timing of this device makes for a slightly sad story. If it had launched in April it would have been one of the first to market, but now it faces competition from all sectors, with the likes of the OnePlus Nord very much stealing a lot of the attention. With that said, it’s the sub-flagship experience that shines here. You can fire up the latest games and play them smoothly, it can handle just about everything you throw at it and the differences compared to a flagship phone are small.

In terms of the user interface and the speed, it’s snappy and responsive, benefiting from Nokia’s pledge to pure Android and makes for a great experience. The addition of 5G means faster data, and while many are yet to make the move to next-gen connectivity, with people keeping phones for longer, it’s likely to be this type of device that sees people upgrade to access that faster data. As an Android One device, you can be reassured that updates will come quickly and you’ll get two Android versions and three years of security updates too. There’s also no bloatware on this phone, no duplication of apps, making for a nice clean experience. Turning to battery life you have a 4500mAh cell which is average for this size of phone. That provides the assurance that you’ll get through most days with ease. It’s only once you start pushing those more demanding tasks, like gaming that you’ll notice that faster battery drain. On the whole, the battery life is good.

Nokia has walked down the same path as a number of rivals in trying to push the sensors and calling it a quad camera. Combined with Zeiss branding, there’s a bit of marketing going on here, because the macro camera is essentially junk and the depth sensor arguably isn’t really needed.

Turning to the main camera, it’s a 64-megapixel sensor, taking 16-megapixel photos as standard. You can’t access the full 64-megapixels unless you enter the “Pro” camera mode, although it’s questionable why you’d bother, unless you really want to crop a little closer after you’ve taken the shot to access that “detail”. As is often the case, full resolution images are a little darker than those from the default setting and we don’t think it’s worth shooting at 64-megapixels.

The main camera is pretty good. It takes good daylight shots with plenty of detail, but it doesn’t quite have results that are as pleasant as some others. Indeed, in daylight, the ultra-wide camera shows a surprising colour difference, in many cases looking better than the main camera. That might come down to the scene detection on the main camera making things worse, it might be because the images on the main camera are brighter thanks to the wider aperture, which over exposes slightly and loses some of the colour.

There’s no zoom on this camera setup, but you can pinch to 10x zoom, but we’d advise against that as the quality drops off pretty rapidly.

Nokia has included a night mode which will attempt to process the image to get better results and it will clean up some low light photos, but it won’t turn night into day like some do. In dim conditions it can be useful, giving a slightly more faithful picture of what you’re looking at.

The setup of the camera app is weird in many places. The default aspect for the ultra-wide camera is 16:9 whereas the main camera is 4:3 so to get comparable photos, you’ll have to change that, or you’ll end up with a gallery of images in different aspect ratios, which is irritating.

Another odd setup is that the selfie camera in portrait mode seems designed to take bad pictures. In the normal front mode you get a pretty good selfie, but switch to portrait and it over sharpens, which makes you look bad unless you use beautification to smooth out the over sharpening effect. The bokeh setting (background blur) seems to be “10” by default too, which shows up flaws in Nokia’s edge detection and is far too severe, but you can edit that to “5” and once you’ve made that edit on an image, it seems to stick in the camera app for future photos.

It’s also irritating that once you take a portrait selfie, when you tap on the preview, even if you’ve turned mirroring off, it’s shown mirrored and then flips as part of the processing. That might indicate that the processing is a little slow on the software side, or might be highlighting that the Snapdragon 765G can’t process these effects as fast as flagship hardware would.

These camera elements are a reminder that this is a mid-range phone and while much of the device performance is close to flagship grade, the camera isn’t. It’s in this area that rivals like the OnePlus Nord or the Xiaomi Mi 10 Lite will seem more appealing – and there’s the forthcoming Pixel 4a 5G to consider too.

On the video front things are a little stronger and Nokia has put a little more focus here, offering a 21:1 cinematic mode that will let you apply things like lens flare, or stylistic colour filters to make something a little more exciting than your typical video. You can shoot at 4K 24fps for a film look, which looks great, but being 21:9 this really doesn’t work as vertical video.