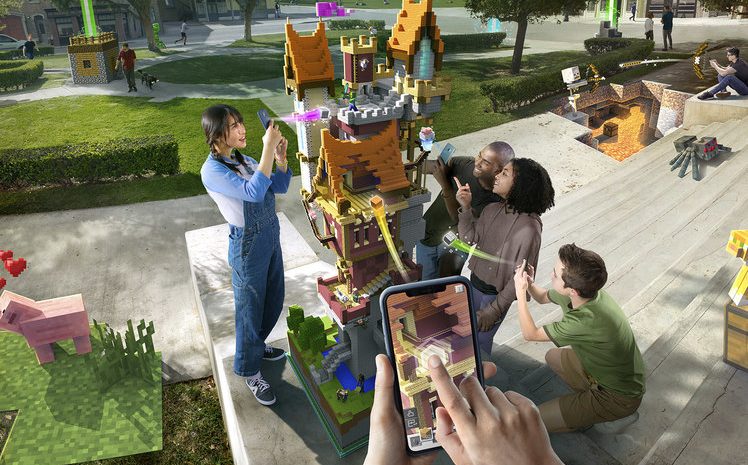 With the mighty success of Pokemon Go and other AR games, it makes sense that software giant Microsoft wants a slice of that action. After all, it owns one of the biggest brands in gaming: Minecraft.

It has bided its time, but is now ready to capitalise on the popularity of AR for its latest block-building mobile release, Minecraft Earth.

But what is Minecraft Earth? How does it work? And do you really have to stand in a park all day creating something on your phone? Read on to find out.

What is Minecraft Earth?

Minecraft Earth is a block building and adventure game, much like the existing Minecraft for PC, consoles and mobile devices. Where it differs is that it is solely designed for Android and iOS and uses augmented reality to overlay Minecraft creations onto the real world.

You can use your smartphone to build creations anywhere you like, placing them in parks, streets, even around and on top of your home. Then, other Minecraft Earth users can hold up their phones and view them.

It’s not just a solo experience neither. You can collaborate on builds with friends or fellow ‘crafters, with each of you using a tablet or phone to build and view the ongoing project.

And, if you’re worried about having to stand in a park for hours to build a masterpiece, it seems there will be an option to build something at home and then place it anywhere outside you like: “Work on a smaller scale with friends before taking your builds out into the wild at full size,” revealed Microsoft during the game’s unveiling.

There will be adventure and collection elements too, with the ability to battle Mobs (creatures that inhabit the world of Minecraft) either placed by the game or other players. Once found and collected, you can then place your own Mobs in Minecraft Earth builds.

When and where will it be available?

Minecraft Earth will start as a closed beta this summer.

We don’t yet know which regions will be eligible for the closed beta, but you can sign up for the chance to play on a dedicated Minecraft Earth website here.

You will need a Microsoft or Xbox Live account to participate and not everyone will be chosen for the closed beta round. However, all those who register will be kept up to date on developments, plus will get a free, exclusive skin for use in Minecraft Earth and/or standard Minecraft.

Microsoft hopes to release the full version of Minecraft Earth globally. That means, while the closed beta may be regional only, the final rollout will be available in all countries and languages currently supported by the regular Minecraft. It does say that the rollout will be gradual, however, to ensure the game fully works in each region.

What platforms will Minecraft Earth be available for?

Both Android and iOS will be supported. You will need a device that is capable of running a decent AR experience, though.

That means you will need a device that runs either iOS 10 or Android 7.0 at the very least – most likely to be compatible with either Apple’s ARKit or Google’s ARCore development software.

How much will it cost?

Minecraft Earth will be a free-to-play game, meaning you can download it at no cost and use the AR title as often as you like without hidden fees.

However, while Microsoft is yet to detail in-app purchasing, it is believed that there will be some – for extra Mobs or skins, for example.

There will be no loot boxes though, so you will get exactly what you paid for – no gambling aspect at all.

You can find out more information about the game from the official website here.