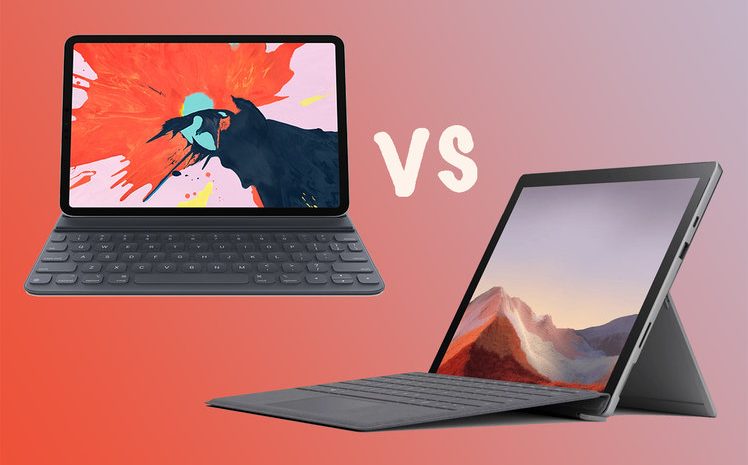 Microsoft announced the Surface Pro 7 at a recent event alongside the Surface Laptop 3, Surface Pro X and the all-new Surface Neo and Surface Duo which won’t be with us until late 2020.

Both devices are similar in size, designed to work with each respective companies’ stylus and they both aim to replace your laptop, but how do they compare to each other and which is right for you?

Here is how the Microsoft Surface Pro stacks up against the Apple iPad Pro 12.9 spec-for-spec.

The Surface Pro 7 is heavier and thicker but smaller overall – it’s over 100g more and those figures don’t include extras such as the Microsoft Type Cover keyboard which is available separately.

The Microsoft Surface Pro 7 looks similar to its predecessor, offers a solid metal body and the kickstand now folds even flatter than on early generations so it can be used like a Surface Studio at a flat angle.

The Apple iPad Pro 12.9 also offers a premium solid metal body and – as we mentioned – is lighter and slimmer than the Surface Pro 7. It has a slightly larger footprint, which you’d expect because of the display.

On the iPad, there’s a Smart Connector is positioned on the left shoulder that will power additional accessories, such as Apple’s Smart Keyboard. There are also two extra speakers positioned at the top, offering four-directional sound for powerful audio.

The Surface Pro 7 also has a connector at its base so you can connect up the Type Cover.

The Surface Pro 7 has the same size screen as previous Surface Pros, meaning it offers a 12.3-inch PixelSense display. The resolution is 2,736 x 1,824 pixels, which results in a pixel density of 267ppi

Meanwhile, the Apple iPad Pro’s 12.9-inch LED-backlit retina display is the largest iPad available in the company’s line up. It’s a little larger than Microsoft’s option. The pixel density is almost the same, as well.

Both the Surface Pro and the iPad Pro have touchscreens that measure pressure, meaning they will both work with their respective stylus. In the Surface Pro’s case, this is the Surface Pen, while in the iPad Pro’s case it is the second-generation Apple Pencil, not compatible with the first generation. Both allow you to draw, write and annotate.

The Microsoft Surface Pro 7 features Intel Core 10th-generation processors, with the base model offering the Core i3, an upgrade from older models. It’s also configurable all the way up to Core i7 which offers a significant amount of grunt.

In terms of RAM, the entry-level Surface Pro 7 has 4GB RAM (not recommended, it’s not enough) while storage options start at 128GB SSD, through 256GB, 512GB, and even a maximum 1TB option. There is also a microSD card slot on the new Surface Pro 7 but no 4G LTE option as yet.

The Surface Pro 7 has an 8-megapixel rear camera and 5-megapixel front camera, which is capable of Full HD 1080p video recording.

The Apple iPad Pro 12.9 features the latest 64-bit A12X Bionic processor with built-in M12 coprocessor. It is offered in storage options of 64GB (not recomended) and upwards and also feature 4G LTE on some models.

The iPad Pro 12.9 also features a 12-megapixel rear camera with a f/1.8 aperture and 4K video recording capabilities, as well as a 7-megapixel front camera – the same as the older iPad Pro.

The cited battery life of both is around 10 to 10.5 hours. Obviously this will depend on use.

The Microsoft Surface Pro 7 features USB-C at last in addition to the older USB-A standard and a very welcome microSD card reader. Thanks to the advent of USB-C there’s no longer a Mini DisplayPort. Again there’s a Type Cover port to connect up the keyboard.

This iPad also has a headphone jack, unlike some of Apple’s devices, as well as the Smart Connector for connecting up accessories. There is no microSD reader though although accessories can now be added via USB-C.

The Microsoft Surface Pro has the option of several accessories, all of which cost extra with none included in the box.

There is a new Type Cover called the Surface Pro Signature Type Cover, which is made from Microsoft’s Alcantara material and there is also a new Surface Pen. The new stylus comes in four colours and offers four times the sensitivity of its predecessor.

The Surface Pro 7 also offers on-screen support for the Surface Dial and there is also a Surface Mouse available too.

As for Apple’s iPad Pro 12.9, accessories are a little more limited, though once again cost extra with none included in the box. The two options include the Apple Pencil (2nd generation) and Smart Keyboard.

The latest-generation iPad Pro isn’t compatible with the first generation Apple Pencil, which was used for older iPad Pros as well as the basic iPad, iPad mini and iPad Air.

The Surface Pro 7 runs on the latest Windows 10 Pro operating system. That means the full bevy of software – from Office to Cortana and beyond – is offered, plus it’ll run third-party apps. It also offers an Office 365 30-day trial. Although Microsoft seems to be transitioning to supporting Alexa more, Microsoft’s own Cortana is still present.

The Microsoft Surface Pro 7 is the more expensive of these two devices, but it is also likely to be the better choice for those actually after a laptop replacement, given the processor, and storage plus RAM can be configured to suit your needs.

The Apple iPad Pro 12.9 on the other hand, will be a fantastic entertainment device, whilst also offering working-on-the-go capabilities, though perhaps not to the same extent as Microsoft’s offering.

Both are powerful, well-designed devices with some good accessories. The decision between them will come down to what you want your device to do.