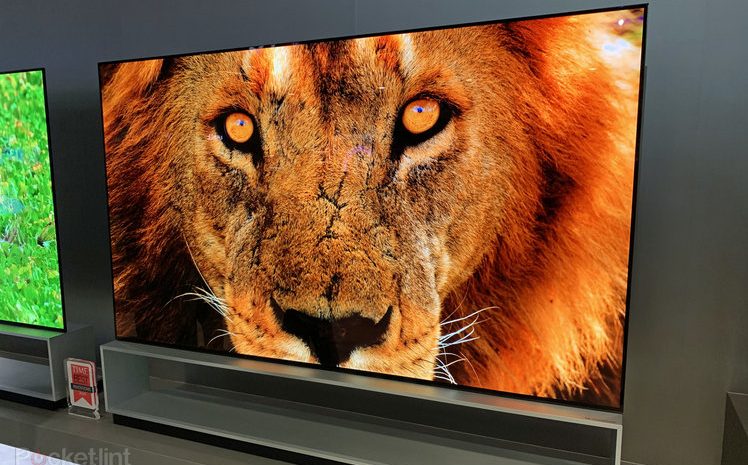 The pick of LG’s TV announcements here at CES 2020 is this stunning new LG Signature TVs – known as the OLED ZX.

The premium ZX range is available in two sizes – 88 and 77-inch and as you’d expect from its range-topping position it is an 8K panel. The model numbers are therefore OLED77ZX and OLED88ZX.

The new TVs LG’s exceed the minimum requirements for the labelling of 8K TVs as an “8K Ultra HD TV” labelling from the Consumer Technology Association (CTA) here in the US. And, as you may have read, this is basically a rival standard to the 8K Association’s logo and similar certification method for a minimum standard for 8K TVs.

The 8K Association is backed by numerous companies, one of which is Samsung.

The overall design of the ZX series is similar to that seen in other Signature series TVs, with a thin bezel all around the display and the now-familiar “letterbox” stand design.

As you can see the chassis is pretty thin, too, especially at the edges of the panel.

Although we only saw canned footage prepared by LG, there’s little doubt this TV is capable of a stunning picture – we were mesmerised by it on the show floor at CES and it had drawn quite a crowd.

The pictures look so crisp and colours so vibrant it’s hard not to be impressed.

The ZX series is powered by LG’s new Alpha 9 Generation 3 processor and can support up to 120fps as well as the latest Dolby Vision IQ HDR standard as well as Filmmaker Mode – yes, LG has joined Panasonic and Vizio in supporting that.

LG’s 8K TVs have support for streaming 8K content up to 60fps and can deliver this over HDMI 2.1. There’s also support for 8K codecs such as HEVC, VP9 and AV1 (backed by YouTube). Nvidia’s G-Sync tech is also present for smoother gaming if you’re planning on using the ZX series as a massive gaming monitor

Like other manufacturers, LG is keen to boast about the AI smarts of its picture processing and uses machine learning to better upscale content to 8K. The AI is able to recognise elements on screen such as text or a person’s face and can apply the optimum processing for those particular features.

Once the content is analysed, the Alpha 9 Gen 3 applies noise reduction and sharpness enhancement to produce the best 8K image it can.

The TV is also able to analyse the type of content being viewed and apply the right presets for image quality of that content – sports versus a movie, for example. Similarly, LG’s AI Sound Pro feature recognises speech and enhances the audio accordingly.

The TV boasts virtual 5.1 sound, although you’re likely to team it with a sound system if you’re lucky enough to be able to afford a TV of this class.

There ZX series has stacks to offer on the smart TV front, too, with support for both Google Assistant and Amazon Alexa on top of LG’s well-known and liked webOS-based Smart TV interface.

LG also says it will support far-field Alexa in future – meaning you can just issue commands to your TV without needing to press an extra button, just as you can with any other Alexa device.