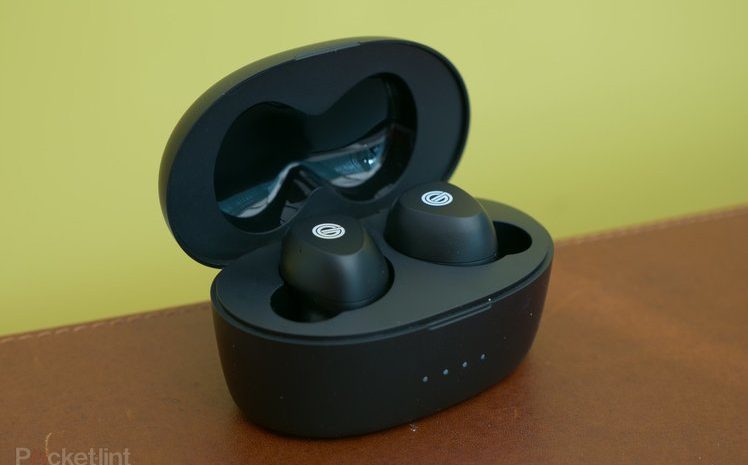 Think ‘Grado’ and what you’re probably picturing is a retro-styled pair of headphones made from metal, wood and leather with completely round cans. In 2020, however, the trendy US company has branched out into the ever-growing world of true wireless earbuds.

The GT220 is a new step for Grado, but instead of going with the tech-first approach of so many other in-ears, Grado has gone with an audio-first approach. That means there’s no active noise-cancelling (ANC), no fancy app for controlling features, and no real flashiness to the design. So is it an approach that works?

The first thing we noticed opening up the Grado GT220 was – almost ironically – that we didn’t notice anything. As far as design goes, there’s little in the way of a distinctive shape or design in these buds to make them stand out. That’s not necessarily a bad thing.

Pull the ‘buds out of the packaging and you’ll notice how the surface appears almost completely seamless. It’s finished with a matte black plastic all the way around. On the outer surface, there’s the iconic ‘G’ logo you’ll also find on some of the company’s unique over-ear headphones. Switched off in the case and that logo is white, but when switched on they flash different colours depending on the earbuds’ status.

The surface with that light-up logo on it is touch-sensitive too, giving you easy controls for your music. Single-, double- and triple-taps on the right ‘bud will play/pause, skip forwards or back. The left earbud, meanwhile, can launch your phone’s assistant with a triple-tap.

What’s quite interesting about these ‘buds is that the ear tips are at the end of a tiny curved ‘trunk’, with the curved surface blending seamlessly into it to ensure you have an ergonomic, natural fit in the ear.

To place the GT220 into your ears requires this sort-of twisting motion which the pushes that tip into the entrance of your ear canal. We found it took a while to find the absolute right fit. Early attempts were a bit too forceful and ended with the tip feeling quite invasively lodged inside. But once we got used to the fit – and we found there is a little bit of an art to it – it is comfortable and secure, without feeling too invasive or pressured. As for the charging case, it continues that approach of using matte black plastic on a case that looks like a giant jelly bean. The case lid holds shut well, thanks to using magnets to snap shut, which also means it’s easy to get open to get at your earbuds. That matte finish feels soft to the touch, and it’s equipped with a USB Type-C port and wireless charging to make it convenient too.

Four LEDs along the front show you how much battery remains, but that’s not particularly a worry. Like, ever. And you might just find it takes a long time before you see just a single LED flashing to denote a low battery.

Everything about these earbuds screams ‘convenience’. Grado has made no compromises in areas that matter. Battery life: not a problem. Charging: easy. Wireless performance: great. Sound: pretty spectacular.

Once you take the fully charged buds out of the case for the first time you have about six hours of music playtime before they’ll need refuelling again by plonking them back in the charging cradle. That’s a lot of music to listen to in one go. Although it is around about the average for truly wireless earbuds. But when you realise the case can offer a further five full charges before it needs plugging in to recharge, that’s when it gets pretty epic.

In total, that’s 36 hours offered by the battery in the case and the batteries in the earbuds. That would be enough to get you through a full work week of commutes, even if you had to travel three hours in each direction everyday.

In real-world use, you might not get exactly 36 hours though. Of course, this is the figure Grado has come up with after testing in labs with the volume set at 50 per cent. Different styles of music and varying volumes will have an impact on battery life. Still, it’s an impressive performer.

The only downside is that – because there’s no downloadable app to view specific battery level – there’s no really accurate way to see how quickly the battery drops on a more macro level. Based on our own usage we suspect most people will be able to go a couple of weeks at a time inbetween charges. When you do need to recharge, you get the convenience of using either a Type-C cable (which you likely already have), or a wireless charger. If – for instance – you have a new iPhone and a MagSafe charger, you’ll easily be able to drop it on top of that and charge it up that way. It’ll work with pretty much any Qi-based charger though, as long as it’s one that lies flat and not an upright style model.

The other bonus here – if you have a phone like the latest Samsung Galaxy flagship with reverse wireless charging – is that you can charge the ‘buds from the back of your phone.

As we mentioned in the intro, those looking at the Grado pair of TWS buds won’t be those looking for the most impressive-sounding feature list. You’re not going to find active noise-cancelling (ANC) here, and you won’t find sensors that enable auto pausing and playing when you remove the ‘buds from your ears.

So while the feature list might not be all that jaw-dropping, once you put the GT220 in your ears and start playing music, you might just start to go a tiny bit slack-jawed. The sound is fantastic. And if that’s the trade-off for not having ANC built-in, then it’s a trade-off we’re more than happy to live with. What’s impressive about the Grado is just how much sound there is – and how much quality bass you get from a pair of in-ears, but without losing any of the articulation in the other frequencies. There’s clarity and bite, but also bass that retains resolution even when it drops really low.

Listen to tracks with some light acoustic accompaniment and backing from guitars or other stringed instruments, and you’ll hear the clarity and the texture, even when that’s accompanied by punchy low synthesised bass or impactful drumming. One part doesn’t drown out the other, and this balance means the Grado pair is very versatile and suitable for pretty much any type of music.

Whether you want to hear the subtleties and extreme volume swelling in an orchestral piece like Bartok’s Concerto for Orchestra, or a modern fusion of synth and acoustic instruments like Charlie Cunningham, or even rock out to some nu metal to remind you of better times, the Grado delivers it all in a way that’ll remind you why you loved all those songs in the first place.