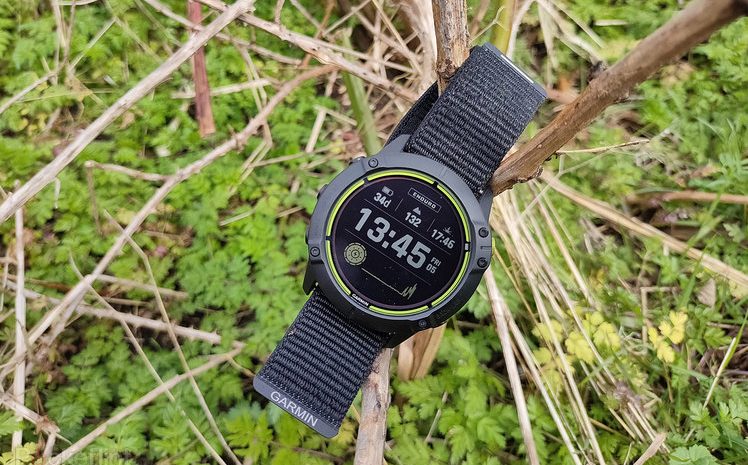 The Garmin Enduro is a brand new watch range with one goal in mind: to give the biggest battery life you’ll find on any multisports watch when you put GPS tracking to work.

It’s also looking to appeal to endurance athletes offering that big battery in a lighter watch design than other battery powerhouses in its range – like the Garmin Fenix 6 and the Forerunner 945.

There’s some new features on the software front too, including as VO2 Max scores for trail running and an advanced ClimbPro feature that will now help you better strategise tackling hilly routes and courses.

That big battery life unsurprisingly comes with a big price tag though. So does the Enduro deliver the goods to make it worth spending on?

If you like small watches, then the Enduro is not for you. It’s got a 51mm case size to give it a stature similar to Garmin’s Fenix 6X and it’s the same thickness as the biggest model option in the latest Fenix range. You’ve got your pick of titanium and or stainless steel polymer cases – with the former offering a significantly lighter build to keep on your wrist day and night. It means it’s almost as light as Garmin’s Forerunner 945 watch.

It’s been partnered up with one of Garmin’s UltraFit nylon straps, both ends of which are adjustable with a Velcro strap to secure it in place. It’s interchangeable, so you can swap it for a range of different straps including leather, silicone or metal bands.

Partnered up with the titanium case option, this nylon strap helps to make this big watch an easier one to live with when you’re tracking or just using it day in, day out.

In typical Garmin fashion, there’s an array of five physical buttons to navigate a display. This isn’t a touchscreen or full colour panel. Instead it’s a 1.4-inch, 280 x 280 transflective display, matching the one on the Fenix 6X for size and resolution. It’s nice and big, so it’s easy to see in all conditions with a backlight in tow for nighttime or early morning sessions. The neon ring around the display is an indication that Garmin’s Polar Glass lens is included, giving you solar charging powers to offer an additional battery boost. As a package, you’re getting a watch that’s been slapped with a 10ATM waterproof rating that does make it safe for a swim and leaving it on in the shower. Well, and the rest: 10ATM means it’s actually good for depths of 100m, so it could survive some diving too.

The Enduro gives off serious Fenix vibes, and while it’s definitely a bulky beast, grabbing it in titanium and pairing it up with a lighter feeling strap means you can enjoy that big screen without it weighing heavy on your wrist.

The Enduro gives you pretty much all you could want and most of what Garmin has to offer on the fitness, health monitoring and smartwatch front. All the key outdoor and indoor sensors are in place, including a barometric altimeter and its Pulse Ox blood oxygen saturation monitor – although the latter that will sap up battery life if you have it in use 24/7. You’ve also got the main satellite players covered and once the Enduro recognised our running terrain, it picked up a signal nice and quick.

One surprising feature that doesn’t make the cut is topographic maps, which you will find on the Fenix 6 Pro series and the Forerunner 945. This feature has apparently been left out to preserve battery life and does still offer real-time breadcrumb navigation and the ability to upload routes to the watch.

It seems like a strange one to not include on a watch built for spending a lot of time outdoors and we have to take Garmin’s word that it would have such a noticeable impact on its big battery numbers. As a fitness tracker, it’s a lot of what we’ve already seen on Garmin’s other watches. Features like adaptive step tracking and the inactivity ‘move bar’ are present, as is the sleep monitoring (which still can feel a little heavy handed on the amount of sleep it tracks and pales in comparison to Fitbit or Polar‘s more reliable sleep tracking features).

When you switch to sports tracking mode, you’re getting pretty much everything you’d find on a Fenix 6 series watch. A multitude of sports modes covering core sports like running, swimming and cycling indoors and outdoors. There’s hiking, climbing, skiing and and a whole lot more besides.

Garmin has introduced a new ultra running mode that adds a rest timer to take in consideration of stopping at aid stations, cutting off the GPS, so you have a more accurate representation of your finish time. This is no longer unique to the Enduro, though, as Garmin has since rolled out the mode to its latest Fenix and Forerunner 945 watches.

It’s the same story with the new advanced ClimbPro and Trail VO2 Max. We’ll start with ClimbPro, which has been on Garmin watches for a while and is a feature designed with helping wearers to better strategise for hilly routes or races by giving a heads-up about big ascents. It’s a feature where you need to upload routes to the watch so it can give you that information in real time. Now it will also factor the descent and flat sections, giving you more information to form how you tackle the terrain. The other new feature is VO2 max for trail running, which is a feature unsurprisingly designed for spending time off-road and will factor in the more challenging terrain to generate a score to gauge of your current state of fitness. We ran with a Fenix 6 without that VO2 Max trail option and there was a 1-2 point score difference. Theoretically, it shouldn’t greatly differ, but if you spend more time on the trails than the road, it’s a nice little extra to have.

Other features of note including new mountain biking specific metrics, along with the ability to generate flow and grit measurements, to offer an insight into the level of difficulty of the trail you’ve been riding on.

Garmin has also included the heat and altitude acclimation and advanced training metrics introduced on its top-end Forerunner and Fenix watches. It’s also brought over its recovery advisor and suggested workouts features that debuted on the Forerunner 745 and are useful to have if you want to add structure to running or cycling or have a better idea of when you should take on a heavy training session or take a rest day. As a smartwatch, you don’t get a built-in music player here, which would be a noticeable drain on battery life based on our experiences with Garmin watches that do support it. You do still get notification support (for Android and iPhones), Garmin Pay for contactless payments, and access to Garmin’s Connect IQ Store to top-up on apps, watch faces, widgets and extra data fields.

Battery life is the headline draw of the Enduro and Garmin talks some pretty big numbers as for how far the Enduro is capable of going. In smartwatch mode, it will deliver up to 50 days or 65 days when you factor in solar charging. There’s some other impressive numbers like lasting a year in basic battery saver watch mode, or the 65-95 days in expedition GPS mode, when you choose to sacrifice some GPS accuracy.

It’s when you don’t sacrifice that GPS accuracy and opt for the most accurate tracking where the Enduro continues to impresses. Garmin states it can last 70 hours in full GPS mode or 80 hours with solar charging. We should clarify that those solar numbers are based on spending three hours a day outside and exposing the screen to 50,000 lux conditions.

To put those numbers into context, Polar’s Grit X outdoor watch offers 40 hours in full GPS tracking mode, while the Coros Vertix outdoor watch goes bigger with 60 hours when putting that GPS to use. What we can say about those battery numbers in full GPS mode, is that they appear to hold up. A few hours of running saw the battery life drop by three per cent. That was a similar battery dent we saw with the Polar Grit X and the Coros Vertix.

At the time of writing this review we haven’t needed to touch the charger for about three weeks – and that’s when putting this watch to regularly GPS use, monitoring sleep, heart rate, and receiving smartphone notifications. That tells you everything about this watch performs.

There’s very little battery drain in-between those tracking times too. On most days it was a couple of per cent – and that was with a tracked activity or two as well.

If you really feel the need to optimise the battery usage further, there’s also the Power Manager features that were introduced on the Fenix 6 to disable features that could be a drain on that battery.