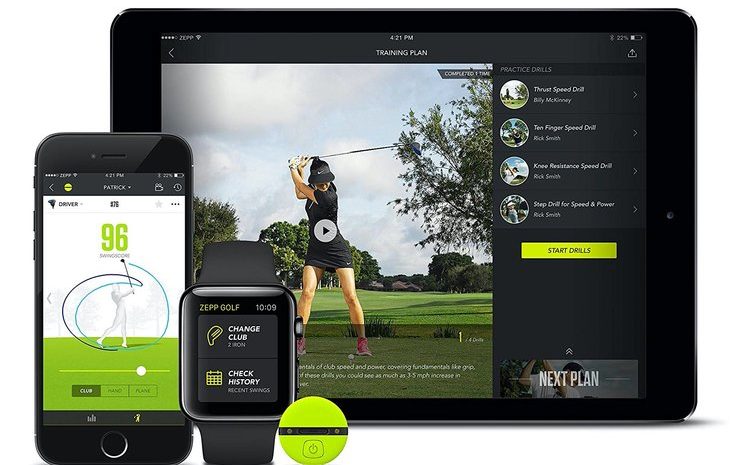 Golf may look like one of the more leisurely sporting activities you could pick up, but that doesn’t mean it won’t take hours and hours of practice to reach the top of your game. Thankfully, there are an ever-increasing range of golfing gadgets out there to help you get better.

We’ve found the best kit to enhance any golfer’s game, from beginners wanting to improve to seasoned players trying to hone and perfect their game. We’ve even thrown in a few fun gadgets too.

Our pick of the best Golf gadgets Garmin may be a smartwatch maker, but it’s also got a surprisingly wide range of golf wearables in its Approach line. The pick of the bunch is the S40, a smartwatch that’s stylish most of the time but comes into its own on the course. The Garmin Approach S40 offers more than 41,000 course guides with shot distances, digital scorecard, green layup details and more for each.

The 43g watch is water resistant to 50 metres and manages 10 days on a charge. It can pair with your smartphone via Bluetooth to display calls, texts and emails as you’re going around the course, so the phone can stay in your bag.

A dedicated Green-View button takes you to the Green View screen where a true shape and layout of the green can be seen. The pin can be touched and dragged to the day’s location for an exact measure of distance so swing power can be calculated perfectly. A AutoShot feature even tracks your shot distances automatically as you play.

The Garmin Approach S40 is arguably the pinnacle of a sports wearable, in that it’s perfect for golf but also a great smartwatch in its own right. The Leupold GX-2i3 is a digital rangefinder that uses lasers and lenses to offer an accurate measurement of distance. It works in both yards and metres, includes a scan mode, and stretches up to a range of 600 yards – beyond even Tiger Woods’ drive.

The lens offers 6x magnification allowing you to spot the pin and read the range of anything in the crosshairs. Leupold also claims the scope can take a real beating and keep going thanks to the rugged waterproof build. The battery should last a whopping 7,000 sightings before needing to be changed. For the money you’ll be hard pressed to find a better-kitted rangefinder. You might, quite fairly, not want to spend too much on your golf game, at least at first – and if you’ve got an Apple Watch, or even just a smartphone, you’re in luck. Hole19 is a great app that will track you around courses, and can give you information about the hole you’re on, including yardage and advised shots.

If you pair it with a compatible smartwatch it gets even better, tracking you without needing inputs. Make any golf glove a smart glove with this nifty little swing analyser that attached to your wrist. It uses a range of sensors to track your swings and reports back on them in the companion app.

You’ll get loads of data on your game, plus training videos to help you improve on your weakest elements. It can also take data from your smartphone and smartwatch to augment its tracking, a clever integration. As we mentioned, Garmin’s Approach series has a bunch of different wearable trackers to choose from. If you’re not sure you have the money for the S40, the S10 represents a great alternative.

This tracker has access to all the same courses, and can give you your distances to the green or hole using GPS. It’s basically a slightly less stylish version of the S40 for those who aren’t as concerned about the looks of the device, and is consequently a good chunk cheaper. Another great tracking system can be found in the form of Game Golf Live, with its distinctive red colours and an impressive range of professional users. The two main sensors here are one that can be popped onto the top of your club before you play, and another that clips onto your belt as you go around the course.

These combine to great effect, tracking and reporting on your play and strokes. It’s easy to then use the associated app to work out where you need to improve, and strategise accordingly. You do have to tap the two sensors together before each shot, though, which is surprisingly easy to forget to do.

If you thought golf wasn’t a physically exerting sport as it stands, this won’t help sway you. Ideal for older golfers, the Stewart X9 Follow golf trolley is electric and automatically follows its owner while carrying their clubs.

The trolley should last you through a game, according to its manufacturers. It uses Bluetooth to follow its owner about the course, but you can also control it manually to navigate it through tight squeezes.

This is just about what the future of sport feels like, with a robot helping you to play and improve, and we’re on board. This one comes about as close to feeling like cheating as anything on this list, but will still help you improve your instincts and get used to aligning your puts correctly. Sqrdup is a laser pointing system to effectively give you a line to hit along when you’re putting on the green.

It’s like playing a videogame, and getting the line where your ball will travel before striking it. Of course, it won’t actually help you hit along that line, but with time you’ll find your putts improving. You might want to let your competitors know you’ll be bringing one in advance, though, so that they can suspend the betting. If a smart golf trolley that follows you isn’t enough, then why not splash out on a full golf cart designed to look like the Batmobile?

The Gotham Golfcart will set you back a frankly outrageous amount of money, but that’s probably not a concern if you’re even considering buying it. It’s based on the Tumbler version of the Batmobile from The Dark Knight, and features six wheels that can handle anything the course can throw at it. The rear four are 28-inch versions of the tyres seen in the film. It’s all powered by a 6-horsepower, battery-driven motor that can reach up to 38mph.

The Gotham Golfcart weighs in at 635kg and is available now. Just make sure you have the Batman suit to go with it or, you know, you might look silly.