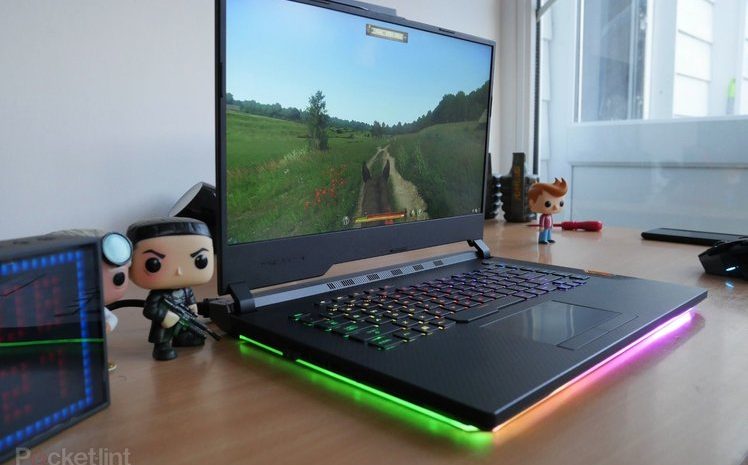 The desktop is dead, it would seem – and long gone are the days where a gaming laptop could only be a ridiculously overpowered, heavy and LED-encrusted monster that would take your arm off and crush your femurs should you try to either carry it anywhere or rest it on your thighs.

Everyone’s at it nowadays, quite cleverly realising that a slightly bumper-sized notebook is where it’s at for the modern-day video gamer. But, with so many out there to choose between, and so much cash at stake, which are the ones you really want to be thinking of? Here are our choices for the best gaming laptops on the market right now, for those who’d rather buy than build. We crowned the Alienware m15 R2 our gaming laptop of the year for 2019 at our latest awards night, and with good reason. This is an absolute beast of a machine, but that word feels unfair given its incredibly impressive design. The m15 looks understated, and is as lightweight as you could hope for, given a comprehensively powerful set of specs.

It doesn’t come cheap, especially if you go for more powerful variations, but for your money you’ll get a stellar experience. Regardless of what screen option you opt for, expect phenomenal contrast and brightness, and even HDR support for games that allow it. There’s also impressive audio performance for a laptop and eye-tracking for those who really want to feel sci-fi. A good keyboard and overclocking controls round out a superb package, for those willing to pay for it. Asus’s ROG line is a smorgasbord of gaming goodness, and the Zephyrus S GX531 is proudly situated at its peak. This is an attractive gaming laptop that’s superb in use, whether for games or work. Its all-metal chassis houses impressive hardware, including up to 24GB of RAM and has a comprehensive cooling setup that can admittedly get a tiny bit loud if you push the laptop hard.

It’s properly portable by weight and size, although the battery life could be better – but a NVIDIA GeForce GTX 1070 Max-Q is there under the hood to power your graphics without breaking too much sweat. Its interesting keyboard and touchpad layout also takes some getting used to, but in both cases ends up feeling more natural and pleasant to use. Razer’s Blade laptops were a bit of a revelation when they first debuted a few years back – although they took a few tries to get it right, the form factor and performance offered make for a fairly unreal combination. Now it feels like Razer improves the Blade every time it tweaks it, and this refresh of the Blade 15 brings ray-tracing power to the table without any compromises.

It’s about as understated as a gaming laptop comes, in a good way, and costs a bomb, but is lightning fast and crunches through current-generation games easily. It gets a little hot under pressure, although that’s hardly a unique issue. Battery life is also solid, and you won’t find ray-tracing in many current machines this small. If looks are your number one priority, the Razer Blade 15 might just be top of the pile. With the Predator Triton 500 Acer has made the sensible choice to not necessarily focus too madly on the looks – it’s a functional machine that makes performance its priority, and does so with real success. That said, the clean design of its chassis is quietly nice stuff. Underneath that metal is a spec list that can be tuned to absolutely eye-watering degrees if you’re willing to pay.

More mid-range bundles are probably advisable, though, and can still have you gaming away without hitches or lag, and connections galore mean you can hook it up to anything you’re likely to need to. The display is cracking, and performance is reliable without getting too hot, although battery life wasn’t top-class at around three hours. This is nonetheless a seriously solid effort from a manufacturer that’s a bit newer to the field. HP’s Omen line has been around for what feels like ages, and has been putting out reliable machines for most of that time. The Omen 15 is a solid continuation of that heritage. It’s pretty chunky, but with a great display and genuinely reasonable starting prices is a great option for those looking to spend slightly less to get gaming.

The Omen 15 does look distinctly gamer-y, with a crest on the back of the screen that won’t go unnoticed, but makes up for it with great performance and customisation options. Its 144Hz display is a joy, while HP is one of the few laptop makers that allows you to upgrade various components down the line if you get left behind – something that we’d love to see become more widespread in this age of sealed laptops. As an all-rounder, the Omen 15 is well worth a shout, especially for smaller budgets. As we said above, Asus has a variety of great machines in its ROG lineup, and the slightly older Strix Scar III is another highlight. There’s no way to ignore it – this is a laptop that’s long on RGB lighting, almost a throwback to the bad old days of gaming design. But it’s also relatively sleek, and lets you control those lights to whatever degree you like.

In the hardware stakes it also does very well, for an undeniably steep price. But this laptop has a premium feel to it in most areas, which makes up for that side of things. It absolutely crunched through the games we tested it with, and that’s the most convincing case a laptop can make for itself. A 240Hz screen is the icing on the cake when you’re enjoying buttery smooth graphics. Lenovo’s Legion Y530 is a useful addition to this list, catering to the slightly less galactically expensive end of the spectrum. This laptop can often be picked up for much less than its already reasonable asking price, and while it won’t set benchmarking records, will still do a cracking job for most gamers.

With a distinctly mid-range set of specs on board, you’ll get solid but not outstanding framerates, although you might find yourself struggling more in a couple of years. Still, though, it’s always worth questioning whether you need to spend more on fancy additions like coloured backlighting and a sleek metal chassis – the Lenovo might well get the job done for you at a much lower price. Acer rounds out our list of the best gaming laptops on the market right now with another solid unit that won’t melt your eyes with its performance, but will get the job done without breaking the bank (depending on the size of your bank). It, like the Lenovo above, sacrifices build quality and design aesthetics for the sake of solid specs inside, and multitasking performance that impressed us at review.

You’ll get no micro-bezels here, with a chunky, plasticky body that houses a capable and sizeable 17.3 inch screen, making for a pretty significant laptop overall. The rub comes in its output though, where even graphically intensive modern games were crunched out at great framerates, which is arguably the raison d’être for a gaming laptop. It might not feel too premium, but the Predator Helios 500 has got it where it counts.