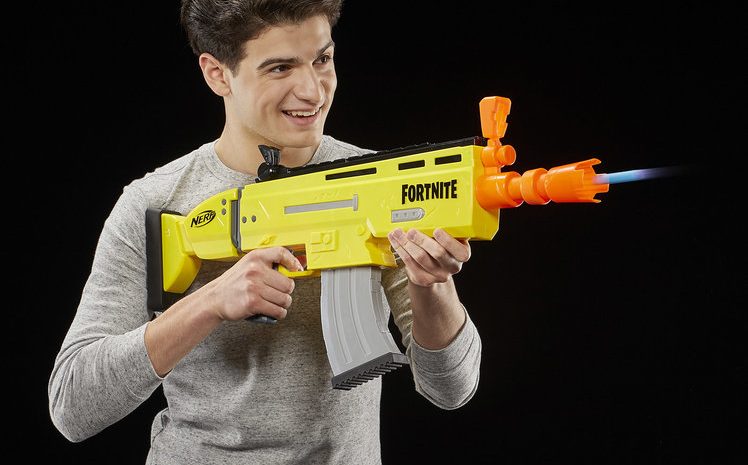 Fortnite is undeniably one the widest-reaching cultural phenomena of recent years — there’s no way you haven’t heard of it. It’s transcended games, in fact, and as a result we’re fully immersed in a boom of great merchandise from the game.

Want to pilot your very own battle bus around you back yard? No problem. Need your very own loot llama to get some more goodies to play with? We can sort you out.

We’ve gathered together a selection of the very best Fortnite gear we’ve spotted anywhere on the internet, all of it available for you to buy. There’s plenty here to put on your wish lists. Warning: this one isn’t cheap. And it is ridiculous. But for those of you entertaining the idea of a Fortnite-themed party for your birthday or next Halloween, this huge inflatable is a must-have. It’s 17.5-feet high and 18-feet long. It costs a bomb and you may need to shop around, however, as it has proved popular. This guy – one of three llamas in the whole Fortnite map – doesn’t come filled with candy, but it will hold a whopping two pounds of it. It’s made from paper and is the perfect fun party game for any birthday party or Cinco de Mayo party. Long gone are the days of having to trudge around Fortnite’s map without a vehicle to speed up your progress. Ever since vehicles came in the game has sped up, and now you can have your own vehicular fun in real life, with this cheerful remote-controlled buggy. If you want to practice your control with even more freedom, though, why not pick up this drone? It’ll make you the pilot of the Battle Bus yourself — just try not to drop your riders off too early! This is an officially licensed Boogie Bomb. When you pull the pin, it lights up and plays music. It even comes with batteries. Hasbro and Epic Games have entered into a partnership to build Nerf blasters based on in-game Fortnite designs.

Their first collaboration results in the Nerf Fortnite Elite AR-L and SP-L Blasters. The larger of the two features rapid-fire motorised blasting, flip-up sights, a 10-dart clip and 20 Elite darts, but there are a bunch more models to pick from if you prefer a different blaster. This is an officially licensed Fortnite Rainbow Smash pickaxe with movable, working wheels. It’s probably the most desired of all in-game harvesting tool. This version is plastic, obviously, and there’s also a 30-inch classic pickaxe made of foam available. Popsockets are neat little gadgets that make holding your phone in one hand much easier. There are several different options to choose from, including, of course, this Fortnite Popsockets stand, which features that ridiculous loot llama

• View offer on KoCustomCreations US

If you’re playing Fortnite on PS4 or Xbox One, you can pick up these cheap controller skins themed around the game. They include the logo, a blue and purple sky, and a player dropping from the sky with rainbows behind them. In the game, the Boogie Bomb is a projectile you toss into a room of enemies (they’ll hop around five seconds while you take up a position to kill them). This 3D holographic lamp gives you a groovy version of the weapon to place wherever you want it in your home. • View offer on Redbubble US

We had to include a phone case for those of you who want to deck your smartphone out with some Fortnite-themed designs. Redbubble has Llama Pinata phone cases. They sell a variety of ones for different phones models – including the iPhone 11. Of course, Fortnite’s partnership with Hasbro resulted in an edition of the Monopoly game inspired by the game! With this, it’s not about what players own; it’s about how long they battle their opponents and avoid the storm to survive.