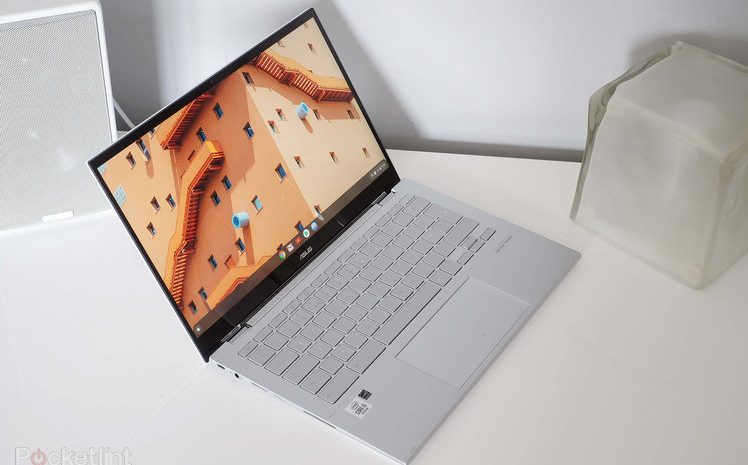 You want how much for a Chromebook? The Asus Chromebook Flip C436 is one of the most expensive Chromebooks we have tested to date, priced at just under a grand.

It costs more than the entry-level version of the Google PixelBook Go. And while Samsung makes a similar-price Chromebook, you can’t buy that in the UK. Asus has tried its best to make its Flip C436 seem a solid deal though: it uses high-quality magnesium alloys for the case and a wide colour gamut screen that beats some Windows 10 alternatives at the same price.

After a week living with this Chromebook does its extra power and associated additional expense make sense?

The Asus Chromebook Flip C436 stands out as a top-end Chrome OS laptop. Many would probably guess this is a high-quality Windows laptop at first glance, which appears to be the idea. But the design goal here is to be taken seriously, not to tease the eye with colour or distinctive lines.

The Asus Chromebook Flip C436 has fairly slim screen surrounds with no raised border, and its case is all-metal. Asus uses a magnesium rich alloy for the case, rather than a aluminium-heavy one, to keep the weight low.

You’ll find lighter laptops if you go looking for them, like the Acer Swift 5, but the Asus Chromebook Flip C436 is easily light enough to carry around all day.

There are a few pros and cons to this magnesium alloy, outside of its low weight. It feels less obviously metallic than the aluminium Apple uses in its MacBooks. That instant cool and hard feel of metal? It’s not so obvious here. This magnesium is a little softer and warmer to the touch. Aluminium telegraphs quality in gadgets better than most metals, but take your laptop out of your rucksack on a freezing morning and you may start to appreciate magnesium.

Oddly enough, the Asus Chromebook Flip C436’s lid has more of the character of aluminium, even if it is coated in a white ceramic-style paint. This lid is stiff, although we are slightly disappointed by the level of keyboard flex – give the centre a solid finger press and it does dip a little, like a taut trampoline. It’s no issue with normal typing, but then we are looking at one of the most expensive Chromebooks you can buy.

The Asus Chromebook Flip C436’s connectors are a little like those of a phone. There’s a USB-C port for peripherals, another for the charger, which can also be used to plug-in a mouse or hard drive. There’s also a headphone jack and microSD card slot.

This makes the Flip C436 a paid-up member of the 2020 laptop squad, as there’s no full-size USB port. If you want to plug in your normal USB mouse or an external hard drive you’ve owned for a few years, you’ll need to buy an adapter or new cable.

Asus does include one adapter, though. You get a USB-C to HDMI, which lets you plug the Asus Chromebook Flip C436 directly into a monitor or TV.

Chromebooks once had a rep for being cheap gadgets, but their keyboards and general build quality are often great. You could destroy an IKEA table with some Acer Chromebooks.

The Asus Chromebook Flip C436’s keyboard is much more in-line with the four-figure Windows laptop norm than the industrial chunkiness of the best lower-end Chromebooks. Keys offer 1.2mm action, just a little below the 1.4mm slim and light ideal, but the feel is good.

We sunk into this keyboard like a familiar sofa, and the ease of the transition is only improved by the simplicity of the Chrome OS button layout. As few extra buttons are required, the left Shift and Ctrl have loads of room to spread out.

The Flip C436’s keyboard is light and breezy, but the feedback at the actuation point is meaty enough to make you feel confident as you type away.

There’s a keyboard backlight too, with five intensity levels. Light consistency is poor, though, which makes the backlight look cheap. The best ones use per-key LEDs, which keeps the light level the same across the keyboard. Should we expect a classier look at this price? Probably.

Asus has not held back the pennies with the Chromebook Flip C436 touchpad though. It’s a wide rectangle of quality textured glass with a firm-feel, non-wobbly clicker. Considering the keyboard is fast and quiet, a slightly lighter and quieter clicker than this one would have been welcome. But the one we do get is perfectly good.

The pad surface is a little too sensitive, though, which can lead to accidental registered non-depress clicks. ChromeOS doesn’t let you tweak this behaviour, so you need to learn to be extra careful about where you stick your finger around the Chromebook Flip C436.

The Chromebook Flip C436 has a 14-inch LCD screen. Colour is the strongest aspect. As part of our testing we tried a bunch of games. Cartoony titles like Cat Quest and Bloond TD 6 look fantastic on this thing. There’s real punch and vivid tones look rich – not sickly.

The Chromebook Flip C436’s good contrast has a hand in achieving this effect out in the real world. It’s not just about colour saturation box-ticking.

Other parts are less remarkable. We used the Chromebook Flip C436 outside on a sunny day and its max brightness is just enough to make writing documents fine, but the screen doesn’t quite have the sizzle for summer movies in the park.

Resolution is also no more than bog-standard. The Full HD panel leaves small fonts with the mildly pixellated look you’ll see in Windows laptops at the price. It’s not an all-out spec festival like the 4K OLED Samsung Chromebook (which is available in the US). Apple’s MacBook Air is also a lot sharper, with almost double the number of display pixels.

A MacBook Air doesn’t get you the C436’s touchscreen or 360 hinge, though. A flappy hinge isn’t particularly useful if a laptop is what you need, but is a benefit if you want to use the Chromebook Flip C436 in bed, or to watch YouTube or Netflix while cooking.

And the question of what you’ll use the Flip C436 for is more important here than in almost all of our other laptop reviews. Why? It’s one of the most powerful Chromebooks available. It has a 10th Gen Intel Core i5 processor, 256GB SSD and 8GB RAM.

Most Chromebooks use far less powerful Pentium, Celeron or AMD CPUs, because they offer the laptop basics at an affordable price. This one is completely different, and the processor is around three times as powerful as the Core m3 CPU used in some higher-quality Chromebooks.

But what does that really get you? It doesn’t mean the Asus Chromebook Flip C436 can use more advanced apps. ChromeOS lets you run Android apps and web-based ones made for the OS, available over at the Chrome webstore. But nowadays you might as well ignore the latter.

Android app support in Chromebooks was wobbly for quite a while. Nowadays it’s much better. Games like Riptide GP run like a dream on the Asus, and recognise the keyboard so you don’t have to use the touchscreen.

But the more demanding among you may still be disappointed. There’s no Minecraft for Chromebooks, PUBG is riddled with graphical errors, you can’t download Fortnite, Elder Scrolls: Blades won’t run, Call of Duty Mobile continually crashes, and ARK: Survival Evolved does not work as Chromebooks don’t support the Vulkan graphics standard.

Most of the 30-odd games and apps we tested work well. However, quite a lot of the most desirable bits of Android software don’t, or simply aren’t available.

We went looking for ways to justify a higher-end CPU in a Chromebook, but did not find all that much. The interface itself does not seem optimised for the extra power either. Chrome OS’s transition animations are still as basic and stilted as ever, lacking the smoothness and physics-influenced animation seen in Android.

There’s only so much the Asus Chromebook Flip C436’s superior processor can shine-up Chrome OS. Look at what a Core i5 can do in Windows and it’s hard not to conclude it is partly wasted here. But if you want to run Photoshop CC, Ableton, Maya or Steam, you’re not going to buy a Chromebook anyway, right?

The Asus Chromebook Flip C436 pays you back, partially at least, with quiet operation. It does have a fan, but it only usually starts spinning when you play games. We did notice that the fan tends to take quite a while to shut off once engaged, but stick to the easy stuff and it rarely starts up.

Our review Chromebook does suffer from some coil whine, a light high-pitch buzz that tends to increase under strain. But you’ll only notice it in near-silent rooms.

Thankfully the Asus Chromebook Flip C436 speakers are easily loud enough to flatten both cable whine and fan noise. There are speaker outlets on each side, but sound also comes up through the keyboard, providing a good sense of a central channel as well as solid stereo width.

You get good bass (for a thin laptop), high max volume, and fair clarity. A lack of vibration dampening is the only real issue. Bassy content at high volume causes the entire shell to vibrate. Certain mid-range frequencies cause buzzing distortion too and, more noticeably, the case vibration just feels a bit odd beneath your hands.

The Asus Chromebook Flip C436 has a 42Wh battery, which Asus says lasts for up to 12 hours. It lasts just a shade under nine hours when streaming video in our tests. A charge will see you through a day of work if you’re careful about what you do, but with mixed use it will likely fall below eight hours – it certainly did when we used the Flip C436 as our day-to-day laptop.