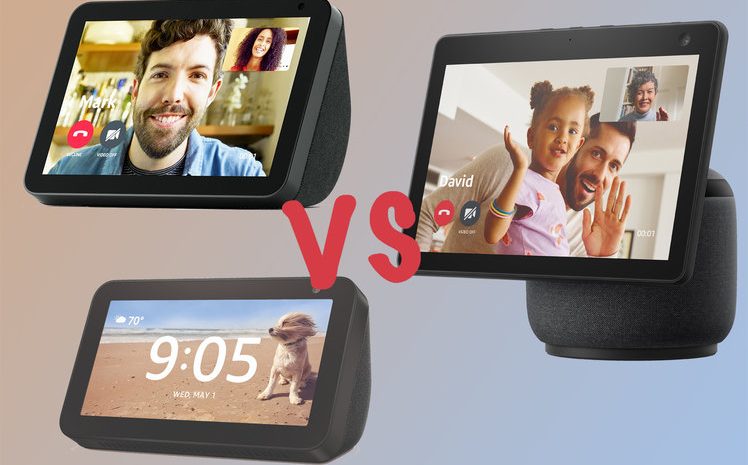 Amazon has updated and redesigned its 10-inch Echo Show. Called the Echo Show 10, the third-generation device replaces the bulkier two-year-old predecessor with a new model that has a fresh look and even rotates to follow your around the room if you’re on a video call.

But how does it compare to the other Echo Show devices? Here we’re comparing the established Echo Show 5 and Echo Show 8 with the latest version – the Echo Show 10 released in late 2020, spec by spec and feature by feature.

The Echo Show range is pretty similar in software capability, but it’s in terms of design that the devices have changed over the last year or so.

The Echo Show 5 and 8 are very similar in terms of design and capabilities – although there are some differences in terms of audio prowess as you’ll hear. The Echo Show 10 is now quite a different device and is ideal as a main Echo device in a family room or kitchen.

Of course, at the heart of each Echo device is Alexa, Amazon’s voice assistant that can help you with all the basics as well as more complicated stuff via the addition of Alexa Skills and automation via routines.

On-screen, Alexa has been a mixed bag so far, simply because she is voice-first. The interface that works alongside the touchscreen display has needed work and Amazon knows this – an improved interface is coming to Echo Show with the Echo Show 10. Since we haven’t been hands-on with it as yet, we’ll have to reserve judgment, but it seems improvements are on the way to all Echo Show devices.

Amazon is also powering up the Show, too, with support for Netflix in addition to the existing Amazon Prime Video and Hulu. In terms of video calling, you’ll also now get Zoom support (plus Amazon’s own Chime communication service for calling other Show devices) as well as the existing Skype. Group calling is also on the way. Of course, Alexa already supports numerous music services including Amazon Music, Apple Music, Spotify and Deezer.

Recipe support comes courtesy of Food Network Kitchen in the US and BBC Good Food in the UK.

In terms of design, all three devices now have a physical privacy shutter (with mic/camera off) and physical volume controls, while all are available in white (glacier) and dark grey (charcoal). The main body of each device is covered in fabric.

None of the devices support Wi-Fi 6, although they support 802.11ac (Wi-Fi 5) and A2DP support for streaming audio via Bluetooth.

The Echo Show 10 has always been seen as a more of a room-filling entertainment device, while Show 5 and 8 are more bedside or desk devices. Indeed, Show 5 is more of a Echo Spot or alarm clock radio-esque device.

The Echo Show 5 and 8 are a trapezoid shape on the rear, whereas the new Show 10 looks more like an old iMac, with a ‘bulb’ or flattened sphere shape holding the screen. There’s a reason for that because the screen can rotate up to 175 degrees. If you’re on a video call, it’ll move as you do in order to keep you in the frame. However, the ’tilt’ of the screen is manually operated.

The main disappointment in terms of the design of the Echo Show 10 is that the display itself has relatively large bezels, but it has clearly been designed to hit a price point. That’s no different to any other Echo device.

The Echo Show 10 has a 10.1-inch HD (not full HD) touchscreen display which appears to have the same 1,280 x 800 as the old 10-inch Echo Show. The lack of high resolution is a bit disappointing, but Amazon clearly hasn’t wanted to make its new Echo line up any more expensive than the predecessor device.

However, the resolution seems a lot more acceptable on the Echo Show 8 (compared to the same resolution screen as in last year’s Echo Show 10, that is). The Echo Show 5 understandable lags behind a little, but because of its diminutive size, the lower resolution doesn’t grate.

This year, Show 10 makes the move to a MediaTek 8183 chip. The old device was Intel Atom-based. There’s also a second neural network processor as well as an ambient light sensor.

Show 10 has a built-in Zigbee smart hub like the new Echo, so you can now ask Alexa to discover new smart home devices providing they’re Zigbee compliant. The Echo 5 and 8 don’t have this.

The Echo Show 10 has a 13-megapixel front-facing camera which is a significant upgrade on the cameras used on the other devices – they’re a meagre single megapixel which is pretty poor.

Echo Show 10 clearly has better audio than the other two devices – it boasts a 2.1 system: two stereo 1-inch tweeters and a 3-inch woofer. Unlike the previous generation, there’s no mention of Dolby-enhanced audio.

Show 8 has dual two-inch drivers that pump out 10W per channel. The audio is actually pretty good, but it isn’t room-filling. Show 5 is definitely more of a desk or bedside table speaker and has a single 1.7-inch 4W driver.

One of the hardest things to talk about with Echo devices is price points because they vary so much due to Amazon’s regular sales. Overall, we feel confident to say that Echo Show 8 offers the best value of these devices.

However, it’s not enough for a main household room, so if you want an Echo Show for one of those locations then you need the Echo Show 10. Clearly, that’s the most impressive device here, but there are some things that let it down, namely the screen design and resolution.

Echo Show 5 is generally available at a very appealing price during sales, but it’s really only enough for the bedside or desk. However, it’s still a very capable device of course.