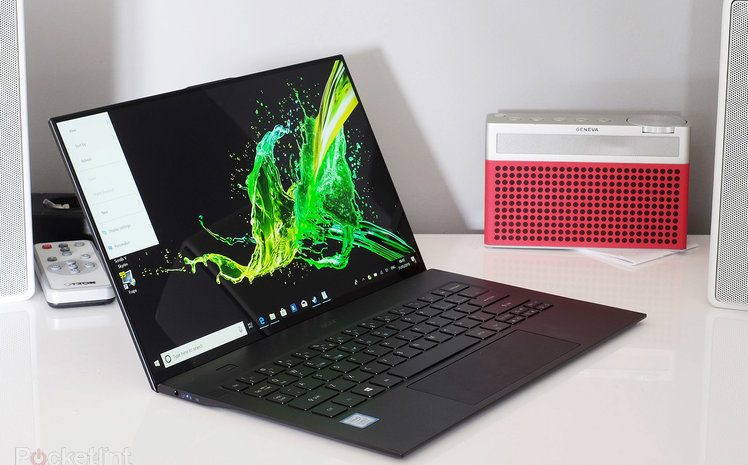 Acer makes laptops for normal people who like a good deal. For the most part, anyway. The Swift 7 line is where it branches out. Previous models have given us some of the thinnest and lightest laptops in the world, with bizarre caveats like trackpads that don’t click.

After that last version, the 2019/2020 Acer Swift 7 seems positively normal. Its trackpad clicks, it has an 8th Gen Intel processor, it’s still incredibly petite, and has some of the narrowest screen borders you’ll find on any laptop.

However, you should probably only consider it ultra-lightweight and millimetre-shaving thicknesses are your top priorities. Because it’s otherwise pricey, not hugely powerful and they keyboard isn’t as satisfying to type on as some Acer laptops which cost a third of the price.

There are four crucial components to the Acer Swift 7 design: low weight, MacBook-shaming thinness, tiny display borders, and the casing material itself.

That last one enables the Swift 7’s slim and light tricks. The laptop uses a magnesium alloy rather than a predominantly aluminium one, which is the default choice for a high-end portable laptop.

Magnesium is lighter and stronger at the same thickness. This is why you see it in several extreme weight-loss laptops. That the Swift 7 doesn’t feel as metallic as aluminium is one reason magnesium alloy is not used more often. It’s warmer to the touch. Some might mistake it for plastic, although it feels a lot nicer than simple plastic to our fingers.

Love magnesium or not, the Asus Swift 7 is one of the best laptops in the world for those quick weekend holidays or work trips when you try to pack everything into a carry-on plane bag. The laptop only weighs 890g, and is so thin that it takes up less space in a rucksack than the laptop-specific padding some rucksacks have.

The Swift 7 is also a lot less deep than most 14-inch ultraportable laptops. Dell received a lot of attention for its very slim screen bezels in the XPS 13, but that has quite a big chunk of blank space below the screen itself. Not so much in this Acer, which means the keyboard plate can slim down too, for a smaller footprint all-round.

You’re probably getting the idea. The Swift 7 is very slim and light. It is not the sturdiest-feeling laptop, though. Pick it up by one end and you can feel the shell bend a little. You can also activate the mouse clicker by pressing the Asus Swift 7’s underside.

This doesn’t make us think it’s on the verge of falling apart as soon as you take it out of the box. But it isn’t what you want at £1799.

Acer has also used one particularly strange measure to make the Swift 7’s design work: there’s no room for the camera on the front, so it sits under a little pop-up flap just above the keyboard. You press it and the camera clicks open and closed like a retractable pen.

That’s a horrible angle to hold a video call from – just as we said of the design in the Huawei MateBook –  and you have to move your head to a slightly unusual position to fit in the frame. It’s a bit of a cludge, no-doubt with the thought most people won’t use the webcam much, if at all.

The Acer Swift 7 has a 14-inch Full HD screen. It looks more unusual than this spec sounds because the border at the bottom of the screen is so small.

This is an impressive technical advancement – even if phones’ screen coverage have already reached far further. It is not an unalloyed practical improvement, though. Less blank bulk below the screen pushes the display further down. Use the Acer Swift 7 on your knees and you have to bend your head down slightly more than usual. Your shoulders won’t thank you.

The Acer Swift 7’s screen is also not nearly as sharp as a MacBook’s. Full HD (AKA 1080p) is enough for a 14-inch laptop, but text looks a bit pixellated.

Like the build quality concerns, this may not be what you expect when opening a £1800 laptop. Then again, if you’re after something you can rely on to last a while between charges, increasing the resolution would not justify the hit on battery life.

In other respects, the Swift 7 screen is great. The display construction is extremely well-suited to bright conditions. We took the laptop out to a park on a very sunny day and found documents and websites are still perfectly visible at minimum brightness, which is pretty amazing. Whites look green until you whack up the backlight, but this is one of the best style laptops you can buy for outdoors use, in the world, anywhere. Colour saturation is great too.

This display is still reflective, though, as it has a glass top layer. Why? The Acer Swift 7 has a touchscreen. This is not a hybrid, though. You can only fold the screen back to the classic laptop standard of about 135 degrees.

The Asus Swift 7 is in many ways a practical laptop, even if it’s an interminable show-off in some respects. But can it do real work?

It has a slightly deeper keyboard than today’s MacBook, but the Swift 7 keys still feel insubstantial. We’ve written a few articles on it, amounting to several thousand words. And, well, it’s OK.

Key action is pretty poor though. There’s little meat to the button depress. But it’s a cut-down version of the standard laptop feel rather than the “clicky nothing” of a MacBook.

The Acer Swift 7 also has a key backlight. You can’t alter the level like some top-end models, but it does auto-dim after a while if you leave it on while watching a video.

We found a few bits of the keyboard tricky to bed into. The directional keys are very small. The backspace and delete keys are crammed-in. But only the slightly vague key feel puts us off. If you want to do serious document, spreadsheet or coding work on-the-go, get a Lenovo ThinkPad X1 rather than this.

After all the build niggles, though, we’re glad to report keyboard itself is stiff, suggesting it’s reinforced inside.

The Asus Swift 7 is far from the most powerful laptop you can get at the price. It’s one of the least powerful.

Its Intel Core i7-8500Y processor has only half the cores of many slightly chunkier alternatives. The vast majority of “Core i7” laptops today have one of Intel’s more powerful chipsets.

If you just need to edit presentations, fiddle with word docs and reply to emails, it’s no big deal. Windows 10 runs well.

If you want to stretch the CPU or graphics chipset a little, the Acer Swift 7 is one of the worst Windows laptops at this price point. We’d much rather have a quad-core i7, or even an i5 CPU, for video editing. Or even macro-loaded spreadsheets.

How about the actual fun stuff? The Swift 7 has an Intel HD 615 GPU, the same as the last generation of Intel Y-series processors. If you want to play games on your downtime, it’s no better than last year’s ultra-thin laptops. Meaning you can play Skyrim at 720p on low settings (much the same as a Nintendo Switch, really).

An Intel Core i7-8500Y is not the ticket if performance matters most. There’s a big “but” here. Laptops this thin and light tend to use either one of these “Y” Intel processors or a Qualcomm Snapdragon, similar to a phone processor. We’d much rather have one of Intel’s. Too many apps and games don’t run properly, or at all, on a Qualcomm laptop – as we said of the Lenovo C630 WOS in review.

There’s a trade-off. Laptops with Qualcomm chipsets tend to last longer between charges than any others. Manufacturers often quote figures above 20 hours, which tends to equate to around 14 hours of real use.

The Acer Swift 7 doesn’t get close to this. Streaming video from YouTube at 50 per cent brightness and it lasts around nine hours. It will last around this duration when writing documents and browsing simple websites too.

For a day’s work it does the trick. But when some alternatives like the LG Gram 14 (a full Intel CPU laptop) and Lenovo Yoca C630 WOS last 50 per cent longer, or more, battery life is not a key draw here. As expected in a thin and light laptop, we suppose.

Silent running is a draw though. The low power CPU lets Acer get away with using all-passive cooling in the Swift 7. There’s no fan, no whirring noises. The underside does get a little warm at times should you use it resting on your knees. And thanks to the dark metallic finish the screen’s lid can get extremely hot on a warm sunny day outdoors. That’s thermodynamics in action, though, not a techy fail.