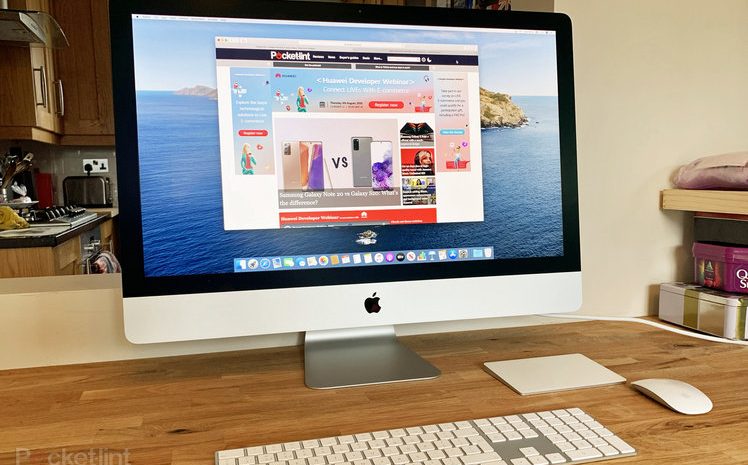 After the dream of announcing that it will move future Macs to its own custom made, Arm-based processors, it only took a month for Apple to show us that the near future is very much Intel-based.

The iMac is 21 years old next week and has already seen one processor transition, so another is just par for the course. But the jury is very much out on whether Apple’s own processors could even begin to match the power on show here.

While at one time the iMac was an entry-level machine that’s no longer the case – even the base level 21.5-inch machine is hugely capable these days. It’s really only the 27-inch that has changed in 2020 – and so that’s what we’re looking at here – but every iMac now comes with 3.4GB/s read and write SSD storage as default, although you can get a Fusion Drive on the 21.5-inch model should you really want to.

While the iMac doesn’t have the power of the Mac Pro or iMac Pro, the top-end models are, more than ever, very much ‘pro’. As last year, the 27-inchers have 6-core processors as a minimum.

Apple sent us the top-end model with several upgrades which we’ll highlight as we go through this initial review. Let’s check out our first impressions of the new model and we’ll have a full review for you on Pocket-lint very soon.

The iMac hasn’t changed externally – rumours of a smaller-bezel iMac have abounded this year but the hardware hasn’t emerged. It would be surprising if this same design lasts when the iMac has Apple Silicon in 2021 or 2022.

The appearance of the iMac still stuns those who are not used to it, whether they’re behind the display or in front of it.

The main thing that dates it slightly is the large bezels when the display is on because we’re used to seeing more and more monitors and all-in-ones – as well as laptops – that have thin-bezel displays. Still, it’s not a deal-breaker and the iMac’s slimline form still impresses as we said.

While the new iMac still has the same 5K display as before, the fact remains it gives a wonderful picture and there’s a little enhancement available this time, too, provided you’re willing to spend an extra $500/£500 for the pleasure – Nano-texture glass.

Also seen in Apple’s incredible Pro Display XDR, the option is designed for particularly glaring environments where you need to minimise screen reflections. The display is still glossy, but the glass is etched at a nanometre level to diffuse light – we don’t have that option on our test model, just in case you were wondering!

Intel’s 10th generation Core processors (Comet Lake) are here under the hood in 6 and 8-core variants of the Core i5 and i7, though it’s possible to upgrade to an epic 3.6Ghz 10-core Core i9 that’ll turbo to 5GHz which is present in our test model.

The graphics options are also newly announced AMD Radeon Pro 5000 series cards, with the Radeon 5300 being the standard option. Both the CPU and GPU options are absolutely bleeding edge, with around a 65 maximum performance lift for the Core i9 option.

The build-to-order options are numerous and you can max out at 8TB of storage, 128GB RAM (double what you could get before) and the AMD Radeon Pro 5700XT with 16GB onboard GDDR6 memory.

That’ll all cost you a pretty penny, of course, and with the Nano-texture glass in the basket as well it’s now possible to spend over $8,000/£8,000 on an iMac.

We’ve got the AMD Radeon Pro 5700XT in our test model alongside 32GB of RAM and a 1TB SSD. As before RAM is user upgradeable through a panel on the back should you want to get it at a later date from elsewhere.

Apple has improved the audio system in this iMac and the speakers are loud and crisp. Good audio quality has always been an iMac strength. The triple microphone array first seen in the 16-inch MacBook Pro includes one on the rear of the iMac’s chassis for noise cancelling.

One thing that has definitely changed from previous models is the webcam – yes, really. Apple has decided to bring 1080p quality to the fore rather than 720p. It’s a welcome change and is something that has been needed for some time – it was particularly galling to still get a 720p camera on the 16-inch MacBook Pro.

What the camera won’t do in this iMac is to enable you to use Face ID. Though that is clearly destined to come to the Mac at some point, we think it’ll be a feature reserved for Apple Silicon Macs.

However, the camera’s image quality is helped by Apple’s inclusion of its T2 chip inside the 27-inch iMac. It also enables the ‘Hey Siri’ feature in addition to encrypting the contents of the iMac’s SSD.

Finally, there’s also an option to upgrade the Ethernet port to 10GB Ethernet, though only particular power users connected to a workplace LAN will need that.

Oh, and this iMac is probably the last Mac to ship with macOS 10.15 Catalina and indeed macOS 10 (goodbye OS X, it’s been a couple of decades….) as macOS 11 Big Sur is just around the corner and will be a free upgrade once released.